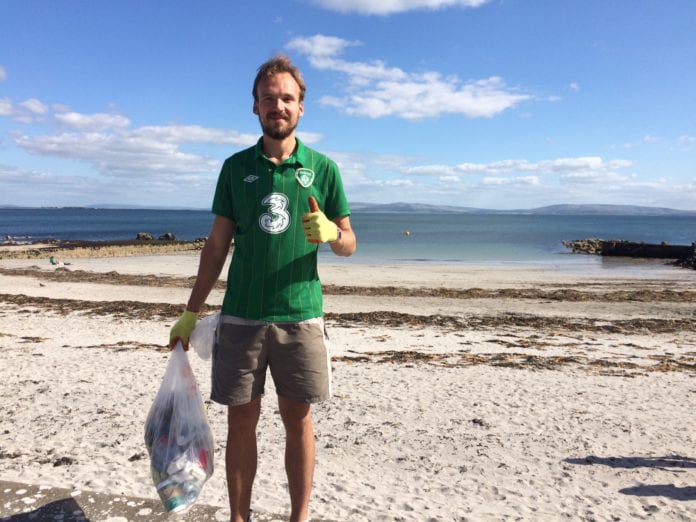 For the past six weeks a young Lithuanian entrepreneur – under the name Paulie Cleans Up – has been collecting garbage in Salthill, South Park, and around Galway. But he’s leaving this weekend.

Paulius Imbrasas has traveled all over the world.

“Obviously I ran out of money pretty quickly, paying for hostels and stuff,” he says. “So I was just wandering around town one day and I saw one of those ‘Clean up’ signs, and I thought it was a great idea.”

So he decided to go to the beach, collect trash, and ask people to donate a couple of euros towards a hostel.

He called it Paulie Cleans Up.

The first day went very well. “Within an hour I got like fifty euros,” he says, adding that he was also given a couple of beers – which he drank while chatting to people.

“Everyone loved the idea. So I thought I could actually turn this into a full-time job.”

Paulie started collecting trash on the beach for 6-8 hours using bin bags and supplies bought from the supermarket as well as a shopping trolley he found in South Park.

After 6-8 hours, he’d go to Shop Street with his big sign – it advertises “Paulie cleans up” – and talk to passers-by, asking them for donations and just generally shooting the breeze.

Friendly and unassuming, tall and tanned, Paulie has quickly become a figure around town.

“I’ve been making a pretty good living from it,” he says proudly.

But he has a flight – booked months ago – from Edinburgh to Vancouver on Monday, so he’s leaving this weekend.

“[Galway’s] awesome. If I wasn’t going to Canada, I’d definitely stay here a bit longer,” he explains. “I’d love to come back.”

Paulie used to drive rickshaws in Vancouver and Edinburgh, a job he first held as a teenager in Vilnius.

“One of my favourite jobs in my life was driving a rickshaw,” he admits thoughtfully.

Rickshawing taught him how to talk to people easily, and become a good salesperson.

“The money you make is all up to yourself…it gave me a lot of self-confidence, and it taught me about the value of my own work.”

One night he met a Mexican couple driving his rickshaw in Vancouver, and after a couple of drinks and a good chat the guy got him a job at his company selling timeshares to wealthy businesspeople.

Paulie moved down to Mexico for nine months for the work – but he much preferred rickshawing.

“As a learning experience, it was invaluable – it was the greatest learning experience of my life. But morally I didn’t feel right about the job, just because I’d sort of be screwing people over every single day. Because the product might fit a tiny percentage of the population, but you have to sell it to absolutely everyone.

“I was getting a decent paycheck, but I wasn’t smiling at the end of the day,” he says. “I didn’t feel like I did a good job – which was the complete opposite of rickshawing.”

On the other hand, driving rickshaws left him “completely exhausted” at the end of the day. “But you’ve got 500 pounds in your pocket and you’d feel like you deserved it, you feel like you worked for it. And the same thing with collecting trash as well.”

So how did such a hardworking young man end up with next to nothing in Galway?

When he first returned to the UK, Paulie says, “I saw all my old friends still doing the same jobs and stuck in the same 9 to 5 living for the weekend sort of thing. And I didn’t feel like I wanted to be part of it anymore.”

So he bought a ticket to Ireland and left most of his cash savings – he estimates around £600-700 – with a homeless man just outside the train station in Glasgow.

“I was angry at the establishment and the system, and I didn’t feel like I wanted to be part of it.”

He ended up in Galway because some coworkers of his in Vancouver were from the city.

“They told me how beautiful and nice it is here,” he says with a smile.

Just last week Galway City Council gave him bin bags to use in his clean up efforts.

They’ve also offered to pick up the bins for him as well – he’d been using restaurant bins on an Eyre Square alleyway (with permission).

He tries to separate out the recycling, but most of the trash is ropes and fishing nets and non-recyclable plastic.

Paulie cares a lot about the environment.

And he is witnessing first-hand the effects of plastic waste and climate change on our beaches.

“It’s pretty bad,” he says. “I really started noticing that in Mexico, because it’s got such a beautiful coast.”

But Galway is the first place he started picking up trash on the beaches full-time. He currently gets funding in cash donations as well as online, using Paypal and crowdfunding platforms like Patreon. 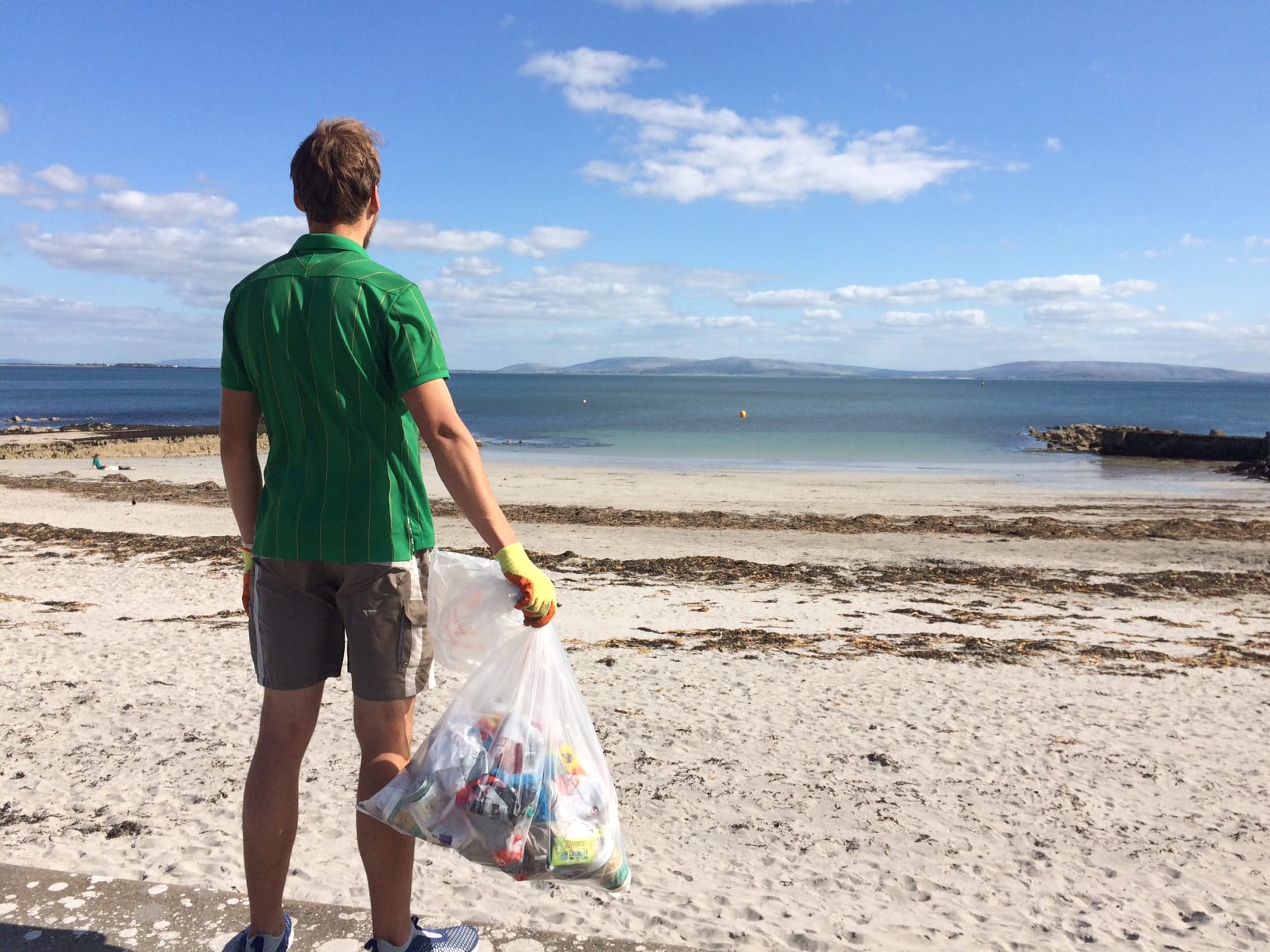 And he’s planning on doing it in Canada too, for maybe 3-4 days per week.

Paulie even has plans to expand if business goes well.

“Hypothetically, if I could get enough funding – let’s say maybe 5,000 euros or dollars a month – even in Vancouver, they have a huge homeless problem. So I can go to a homeless shelter and…hire ten guys for a day and give them a day’s wage. If I could do something like that, it would feel great.”

As for his legacy in Galway, Paulie has met a lot of people who have told him he’s inspired them.

And one guy named Daniel from Sligo is setting up his own eco-project to clean up Galway’s canals.

“Most people have been really loving what I do,” he says. “My plan is to see what happens…I’m making more than enough money to get by.”