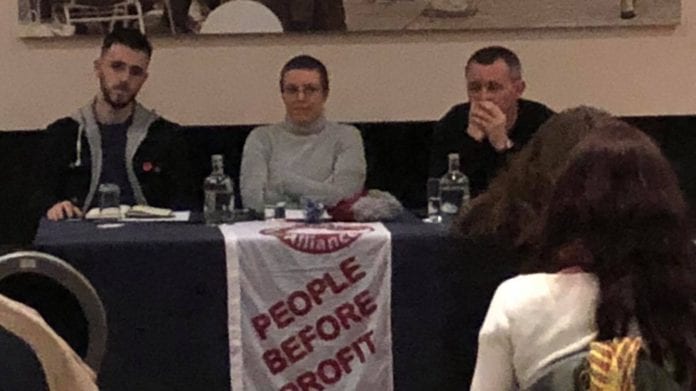 On Monday the Galway branch of People Before Profit held a meeting in the Galmont Hotel outlining their solutions to the housing crisis in Galway. 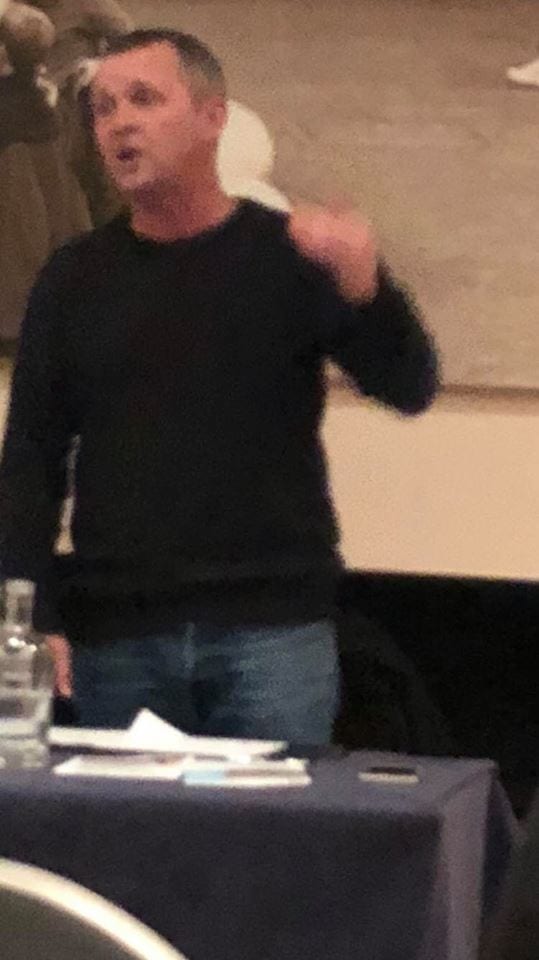 Richard Boyd Barrett initially took the reins describing the ‘housing emergency’ as a national scandal shamefully impacting on human beings from all walks of life.

The TD referenced 10,000 people currently in emergency accommodation along with 4,000 children stating this was shocking, unfair and unjustifiable.

He then slammed property prices being out of reach for the vast majority of working people.

Barrett described how the housing crisis was effecting a vast amount of areas in Irish society.

In doing so he mentioned the plight of asylum seekers in Ireland currently living in Direct Provision centers and the ‘horrendous situation’ facing the traveling community who have been faced with ‘savage cuts’ in the housing budget of up to 90%.

The Dún Laoghaire TD expressed his sympathy for young people ‘totally locked out’ of any possibility of being able to afford a roof over their head.

Barrett emphasized how the important thing to note was that the current housing crisis hasn’t happened by accident.

He expressed his view that the crisis was a direct result of policy decisions which resulted in the marketization of housing.

This marketisation turned housing into a commodity instead of a basic human need, he said.

According to Barrett, this was spearheaded by the Fine Gael/Labour government resulting in disastrous consequences and the TD made reference to former Minister for Finance Michael Noonan having ’65 meetings with vulture funds and corporate landlords’.

In doing this, large amounts of NAMA’s portfolio of land and property at a ‘massive discount’ resulting in huge tax breaks for these vulture funds and corporate landlords.

His solution to the housing crisis is to allow public houses to be built on large quantities of public land.

The TD outlined his desire for empty private property being put back into public ownership if that property is lying dormant for six months along with rent controls.

Conor Reddy – Take Back the City 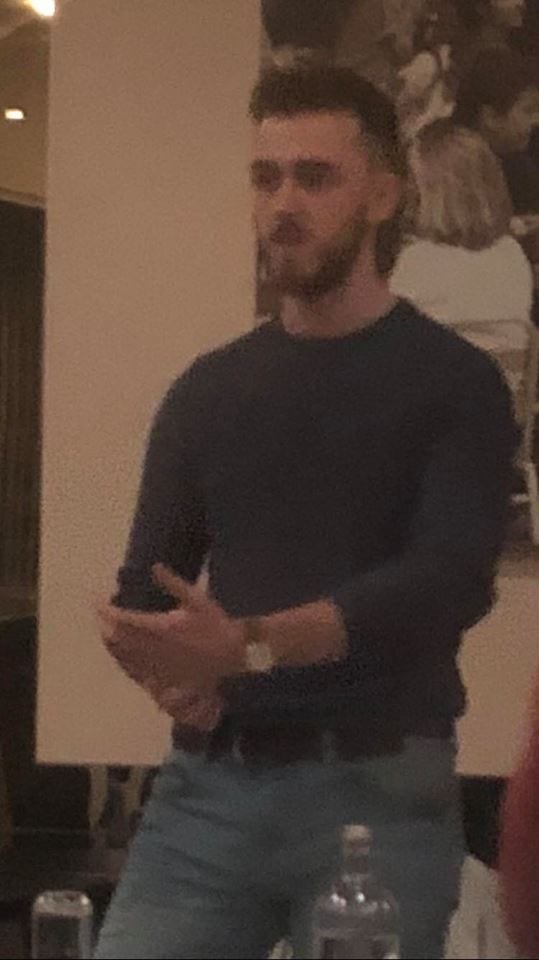 Conor Reddy was next up to speak declaring that the Take Back The City campaign was set up to tackle to core of the crisis.

In outlining the importance of safe and secure housing, he said it was a vital tool in how you engage with your community and society.

The housing activist gave an account of the first occupation he took part in with Take Back The City. This comprised of an occupation of a property on Summerhill Parade.

He noted their first demand was that all properties in Summerhill parade should be placed into public ownership through compulsory purchase.

Secondly the housing group demanded all long term vacant land and vacant property to be placed into public ownership and used for housing.

Finally the last of the demands consisted of capping rents at €300 per month, per room.

Conor Reddy highlighted the purposes of the Take Back The City campaign as sparking a national movement on housing and changing the overall perception of public housing.

He acknowledged the ‘bad rap’ social housing gets in Ireland as people tend to associate it with ghettoisation. To counter this,, he made reference to Vienna in Austria where 70% of the city population live in public housing.

The activist recalled specific instances of direct action employed by Take Back The City such as taking over the Department of Housing in Customs House demanding a meeting with the housing minister which was eventually given.

“This shows that when you put the pressure on these fuckers they cave,” he said.

Rounding off his speech to a packed room in the Galmont Hotel Galway, he called for commitment from those in attendance to take direct action ‘building support groups for tenants as well as building a presence and resistance on the streets of Galway’. 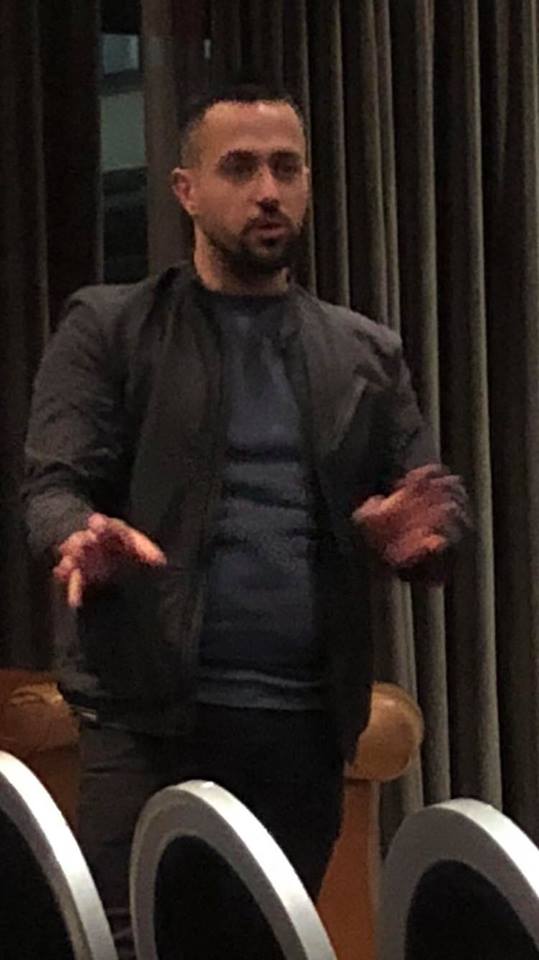 The final speaker was local People Before Profit activist Joe Loughnane. Loughnane expressed his belief that the solution to this housing crisis is a ‘push back towards public services’.

Loughnane drew upon his experience as a student and how he ‘knows for a fact’ when he graduated, and right up to now, there are instances where there are 10-15 students to a house.

To add to this Loughnane emphasized his disgust at the fact he has been made aware of situations where students are sleeping in cars.

He expressed his sympathy with students who have to commute to college in Galway from other counties.

The future People Before Profit General Election candidate scorned Peter Casey who says ‘took advantage of the housing crisis and tried to make a racist thing out of it’. Joe says his party refuses to do this and that the housing crisis effects everyone no matter what race, culture or creed.

Speaking in relation to travelers, Loughnane commented how he knows for a fact since 1996 the money that was allocated to Galway City Council to provide for culturally appropriate traveler accommodation hasn’t been drawn down. Building on this he stated ‘The TD’s and Councilors of Galway will seek to blame the traveler population for the purposes of deflection’

The activist then spoke at length about direct provision centers and how there are currently individuals who have already been granted asylum who can’t leave the center due to the cost of housing and lack of social housing.

Loughnane finished his speech declaring People Before Profit will seek to unite everyone effected by the housing crisis. This will be done through direct action in Galway going forward.