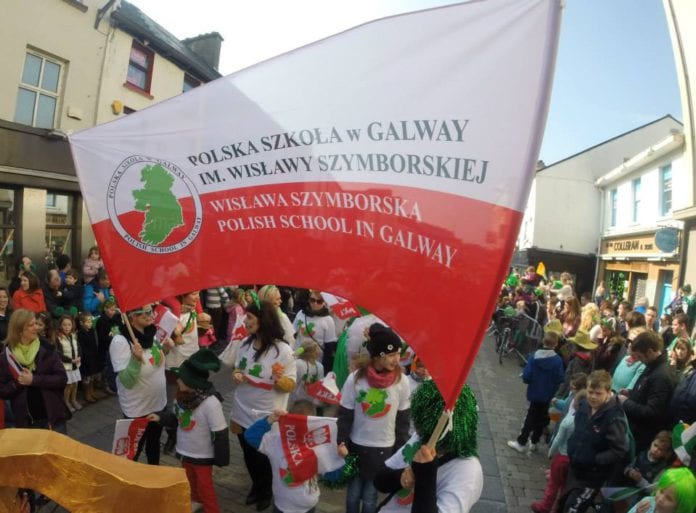 What happens when members of your family begin to forget their native tongue?

The Grochola family, originally from Poland but living in Galway, encountered this problem shortly after arriving in the city.

And they decided to do something about it.

Agnieszka noticed that her son, who was seven years old, couldn’t speak Polish without using a few English words. As it turned out, many other families were having the same problem.

She decided to set up a Polish language school in December 2009 and since then, the Polish School in Galway, which is its straight-to-the-point name, has grown into one of the largest Polish ethnic schools in the country.

Agnieszka’s daughter, Magda attended the school from the beginning and graduated from the school four years ago. “It all started with our family. We moved here and like other Polish families, the children started learning in different schools and started forgetting Polish,” she says.

Some people might not understand why this would be a problem. After all, we ditched our own native language when it was no longer in our economic interests to save it.

But Agnieszka wanted to ensure her children spoke fluent Polish. “My mum was a teacher in Poland and she really valued the language,” Magda says, proudly. “Once she saw that my younger brother- who was only seven I think at the time- couldn’t speak Polish properly without using English words in a sentence, she thought there was a need for [a Polish school] as there were more families like that in Galway.”

Magda then went on to help her mother as a volunteer after she graduated in 2013. She explains how the initial project was on a small scale. “She set up the school in Galway along with other parents and teachers. First there was a trial project in Claddagh and it was a success so then they founded the school in Merview in the national school and we were renting that on the weekends.”

It has grown massively since 2009 and it now has 480 students who attend classes every Saturday for four hours. It is inspiring to see so many people take an active interest in their own language, ensuring it is passed on through the generations, even in a country where it is not widely spoken.

Eight years on, it is now so popular that there is a waiting list. “The demand is much more than that but we cannot find another school that would let us use it for the weekends. There’s a full class of a waiting list for four year olds,” Magda says.

The official website contains a small section which refers to women. “Polish women are of course the most beautiful in Europe. But they are also exceptionally resourceful; in the communist era, they had the job of ensuring the welfare of the entire family.”

It is difficult to argue with that considering the work Agnieszka and her daughter Magda have done for their community in Galway.

“There are also kids from multi-lingual families. There’s a child where her father is Irish and her mother is Polish so she would go to the Polish school when she was four and she now speaks fluent Polish, English and Irish,” she explains.

Although the Polish population of Ireland has dropped in recent years, we might see a rise in the number of Polish immigrants here in the future once Britain leaves the European Union. Ireland will be the main English speaking country in the EU by 2020, meaning those who leave Poland in search of employment might be drawn to our shores.

The Polish Embassy in Dublin believes the Polish community have integrated well in Ireland because of cultural factors such as religion and our shared love for a pint in the pub, and there are many cultural events organised by the Polish embassy and community groups all over Ireland to bring Polish and Irish people together.

In Galway, the Polish School goes beyond its primary function; it organises events for the community throughout the year. They have organised Carnival balls, family picnics and school plays and the school regularly participates in the Galway St. Patricks Day parade. They are organised by the 32 teachers who currently work for the school, who are paid for the four hours of work they do each week.

“There are 32 teachers at the moment and this is a non-profit organisation but they are paid for their work, which is just four hours a week but volunteers would be helping a lot during any kind of events,” Magda says. “So, we would have like a book day and something for Valentine’s Day and we would do something at Christmas, so different events like that bring the Polish community together.”

One of their biggest achievement has been the Polish library which was opened in the Merview school. Magda has volunteered there since she graduated. “We have a very big library with mostly Polish books and that is open to the public. We were given one of their rooms to use as our library. Most of them were donated and we were supported by many other organisations as well – the Polish Ministry of Education.

“They’ve just been collected over the years, there’s thousands of books in that library at the moment and that would be mainly run by volunteers except for the one main teacher who is there permanently,” she says.

It has been a major success story—from a small project launched in December 2009, it now plays a significant role in the Polish community in Galway. And the school will only continue to grow if they can find new locations to teach children each Saturday.

Their website refers to resourceful Polish women looking after the family in the communist era, but in the era of Polish immigrants in Ireland, one Polish teacher has taken on the job of preserving their language for the entire community, and succeeded.