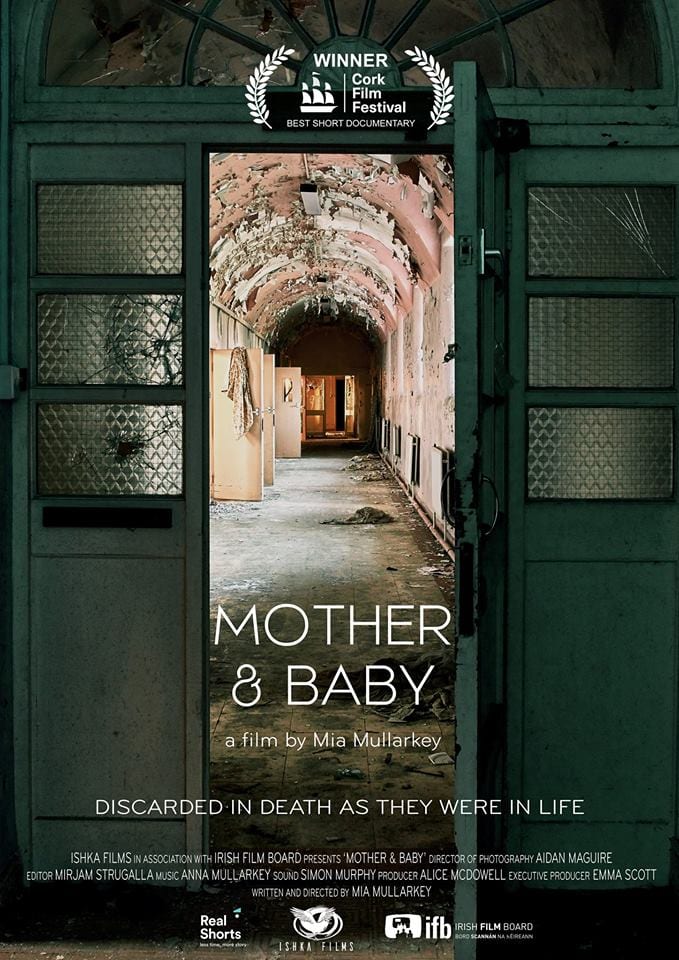 The Virgin Mary extending her arms behind a plexiglass pane surrounded by flowers.

A close up of amateur local historian Catherine Corless as she listens to a tape recording of a former housekeeper at the Tuam Mother and Baby home.

This is the opening of the powerful new documentary ‘Mother & Baby’, a film by award-winning filmmaker and Galway native Mia Mullarkey.

The film is about the institution where the Bon Secours sisters hid away women who fell pregnant out of wedlock — and their children, many of whom died and were buried in an underground sewage area.

“Julia Devaney spent her entire life in the home,” Catherine’s voice tells us over scenes of the playground built on top of the now-infamous infant burial site.

“She absolutely loved the children, and she couldn’t do a thing for them, because she said she’d be sent off to a mental asylum if she intervened.”

The tape crackles. Julia speaks, her recorded voice rich with emotion as she remembers what it was like to live there.

“I knew there was a lot of cruelty in it,” she says at one point. “Well God, Heaven above, ’twas hell. When they got in there they used to crucify them children.”

With an understated yet moving soundtrack composed by Mia’s sister Anna — best known around town as the lead singer of local band My Fellow Sponges — the film takes us through the lives of three Home survivors and how Corless uncovered the awful truth.

“And then we sort of move forward in time from their memories to who they are now, and get a sense of their resilience, and their strength from having come through that.

“Then running alongside that storyline is Catherine’s research in uncovering the whole event…And it culminates in the vigil, which is a little bit cathartic, but also shows the anger at what happened, where the survivors finally become a family and they become a voice. And they can now hopefully get some justice.”

The candlelight vigil — held in November 2016 — was organised by Corless and artist Sadie Cramer. More than 300 participants took candles and walked from the burial ground into Tuam town square in remembrance of the victims of the home.

Last March the site made headlines around the world when a government commission investigating the area found “significant quantities” of human remains in an underground structure apparently built for sewage.

The bodies ranged in age from 35 foetal weeks to 3 years old, all dating to the time when the Mother and Baby Home was in operation.

Based on independent research by Corless showing death certificates for nearly 800 babies and children — but no burial records — the investigation is ongoing and is expected to publish a full report on its findings in February 2019.

In the meantime, Mia’s beautifully shot 20-minute documentary acknowledges the suffering that had for so long been a dark secret.

And although centred around the home in Tuam, the film is relevant to the rest of the country as well — since Mother and Baby homes were found in every corner of Ireland.

So while the documentary’s release was somewhat Galway-focused — the first screening took place in Tuam for the Mother and Baby Home survivors there, and a recent showing in Campbell’s Tavern in Headford played to a packed house and featured a moving Q & A session with the survivors Peter Mulryan, Carmel Larkin and Pat Duffy — Mia ultimately hopes to show the film in festivals all over Ireland.

“So it has a cathartic effect, a healing effect.”

The next showing of ‘Mother & Baby’ will be on the 26th February at the Lighthouse Cinema in Dublin.

If you would like to get in touch with Mia to host a film screening, she can be reached at mia@ishkafilms.com.