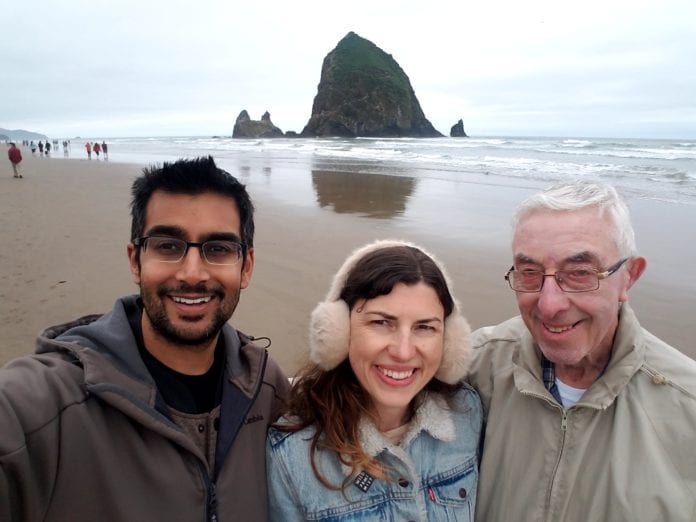 Born and raised in Ireland, Carmel Breathnach moved to the USA in 2005 to take up the position as a lead kindergarten teacher in Portland, Oregon. She holds a Bachelor of Arts degree in English Literature and Irish Language studies from NUI Maynooth, and a Diploma in Education from St Patrick’s College, Dublin. Carmel’s writing has been published in Huffington Post, Huffington Post Women, Upworthy, Scary Mommy, Voice Catcher and Modern Loss. One of her essays appeared in the anthology Hidden Lights by Golden Dragonfly Press. She is currently seeking representation for her memoir A LOVELY WOMAN. The following is an essay Carmel Breathnach wrote about her grá for Galway Hurling.

On Sunday, August 19th, I sat glued to our couch in Oregon, USA, 7,366 km (according to Google) from Galway city, where I was born forty one years ago. The All-Ireland hurling final between Galway and Limerick was the reason my American born husband and I were seated in front of a laptop tuned into RTE at 7 a.m. on a Sunday morning. We do not own a television, avid readers that we are, but the lead up to the All-Ireland saw us dragging ourselves out of bed at crazy hours to position ourselves in front of the screen.

Generally, I’m not a sports fan. Music, literature and travel are my main interests, but a mix of connection and nostalgia play a large part in my love for Galway hurling. I have no interest in American sports though I’ve lived stateside for thirteen years. Professional basketball players earn millions a year and serious injuries are common in American football, due to its nature as a full-contact game, where players also rake in millions. Irish hurlers play with passion and determination out of a grá for the game and this is admirable. During the All-Ireland hurling final the commentator referred to one player as a primary school teacher. This vocation is poles apart from a high-earning professional sports player.

My father, a Moycullen man and avid follower of the Galway hurling team fills me in during hurling season on the team’s progress over phone conversations, emails and in handwritten letters. Dad was born in the nineteen thirties in Moycullen and I was born several decades later in Galway Regional Hospital. My late-mother was born in Waterford, as was my brother and though we lived most of our lives in Co. Offaly my father and I remained loyal to the Tribesmen.

Galway hurling matches link me to a time when my birth family was composed of four people instead of three. I was eight years old when my father took my brother on the train to Dublin for the semifinal between Galway and Cork in 1985. It rained heavy and my mother worried as the two of us sat by a warm fire watching the television while praying for a Galway win. Galway surprised the country by winning that game and Dad and my brother came home drenched but beaming from ear to ear.

As a young girl my father took me in the old Ford Escort to Athenry where we watched the team train. On these occasions my mother was often in hospital recovering from chemotherapy treatments. Crushing on Pat Malone in particular, and a few of the other players, I managed to snag autographs in my little autograph book. Sometimes I caught the sliotar allowing me the opportunity to rush forward and hand the ball over to Brendan Lynskey or Pat himself. Greeted with a wink and a smile, I would stroll back to my father’s side beaming. Dad enjoyed these outings and to this day he has a poster of the 1988 Galway hurling team up in his bedroom and a framed photo of the team from 1980 on the wall in our hallway.

Galway won the All-Ireland in 1987 but my mother was quite sick then. She died in March of 1988. When Galway won the All-Ireland the following September I was eleven years old, watching the game on television in my aunt’s house while Dad attended the match with his brother. I yearned for a Galway win and when they bet Tipperary I couldn’t wait to see my father’s smile on his return. He had been through so much and I knew a Galway win would give him a boost of happiness.

Until 2017 Galway didn’t win another All-Ireland hurling final. We never gave up on them and 2017 brought joy and pride to Galway fans everywhere. We hoped they could do it again this time but Limerick deserved the 2018 All-Ireland title. I sent a text to my father after the game and his response was generous and kind. “Limerick deserved it” he messaged, “The better team won. It’s nice to see it going around.” This is one of the reasons I’ll always have a grá for the game. My father, as a loyal hurling fan, consistently modelled kindness and civility.

Since the earliest days Dad has loyally listened to every Galway hurling match on transistor radio, television or computer. We’ve listened to matches while rambling in the Slieve Bloom Mountains or in the old Fort Escort making our way up the winding Vee towards Cappoquin, Co.Waterford, with Mam gripping the heavy radio in her hands. I’ve tuned in to games during my father’s visits, holed up in some motel on the coast of Oregon vying for reception. I’ve listened to matches as gaeilge when I couldn’t tune in visually and I’ve paid $20 a game at Kell’s pub in Portland. Hurling is unique and exciting to watch. As long as Galway remains in the game I’ll tune in, and half way across the globe my father will do the same thing.