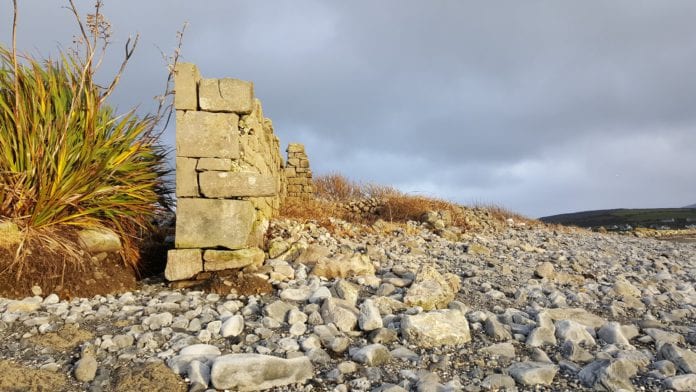 Everyone has experienced the devastation wrought by increasingly powerful storms like Ophelia, Eleanor, and – most recently – Emma.

But while Galway residents clear the mess and batten down the hatches, some of our most vulnerable areas are being ignored – and with their loss we risk watching our own history wash away.

According to recent NUIG archaeology MA graduate Kiaran Moylan, 388 coastal archaeological sites in county Galway are at risk of being lost due to erosion.

The Carna native – who now lives in Barna – looked at the effect of rising tides on 13 archaeological sites along the Galway coast, from Aughinish all the way to Killary, for a recent study.

The sites he surveyed were all within 50 metres of the coastline. He used satellite data to plot the high water mark, where the shore meets the land, as well as plotting the sites themselves.

Moylan then compared his data to that from National Monument Service maps and satellite images taken between 2005 and 2012.

And what he found shocked him.

“When I put in my lines onto that map, you can see a huge difference…You can see the erosion. And in some of them, it’s dramatic,” he said.

One of the sites he documented was a 17th century church in Aughinish, which has now been completely destroyed.

“The sea now is in the middle of the church. It has eroded all the way. In 2016, the tide [had] washed away the south side…and there was only about two metres of the West gable left. But I went back two weeks ago, and that gable is now gone. It’s just gone.”

Moylan spent years as a marine research technician for NUIG.

But when a bout of illness damaged his lungs and scuba diving was no longer an option, he decided to go back to school for archaeology. He kept his passion for the sea alive by doing his research on the coast.

His quiet voice fills with sorrow as he describes the potential loss of valuable artefacts and information at various sites around the West, including a shell midden in Ros a’ Mhíl – one of the oldest in the country – as well as a tomb in Cleggan and St. Feichin’s holy well on Omey Island, which has already been flooded from the tide at least once.

Another site at risk of destruction is a children’s burial ground in Na Mine, Connemara, where people buried unbaptised children – whose bones are now being washed out of their graves.

Said Moylan: “The children’s burial ground has been totally covered by storm beach…where all those stones have been pushed up by the tide onto the land. It’s totally covered over with stones.

“It’s very sad, because the bones are being washed out. And any time you go out there you find small skulls…and the local people are trying to do something about it. They’re looking for funding – they want to try to protect it in some way, but it’s very difficult to protect.”

Many of these burial grounds are found near water, at the border between land and sea, because the children’s souls were believed to be in limbo. But this puts them at higher risk of erosion.

So what can we do to protect these sites?

“There isn’t a rescue unit, or rescue archaeology for Galway,” said Moylan. He attributes the erosion problem largely to the effects of climate change.

“There’s no doubt that the tides are rising…and storms are becoming more frequent, and more severe. There’s very little that we can do against the sea.”

He added: “When you lose half a metre of the coastline, it’s gone forever. There’s no going back. You’ve lost it. So all the erosion that’s happening, it’s irreversible. You cannot stop it.”

Yet there are ways to identify the most at-risk sites and gain information from them before it’s too late.

Moylan would like to see a project similar to one in Scotland, where a charitable trust called SCAPE works to document coastal sites before they are destroyed.

“[The trust has] organised community-based groups who keep an eye on the shore where there are archaeological sites,” he said. “So they’ve given them very basic forms, and they go out every couple of months and maybe measure, take photographs.

“And in some cases, where there’s a site that’s in immediate danger, they will do a rescue excavation.”

The award-winning project – called Shorewatch – is aided by the University of St. Andrews, which helps train local volunteers in finding and documenting archaeological sites.

Moylan is hopeful that a similar project in Galway would help preserve our heritage for generations to come.

“It’s fantastic. We need a model like that here,” enthused Moylan. “The erosion here…it’s happening at an alarming rate.

“One of the middens that I [excavated]…there was evidence right back to prehistory in it. And it’s being washed away.”

But unfortunately, for some of Galway’s historical sites, there is nothing anyone can do.

Said Moylan: “The church in Aughinish, it’s beyond protection. It’s just too late.”