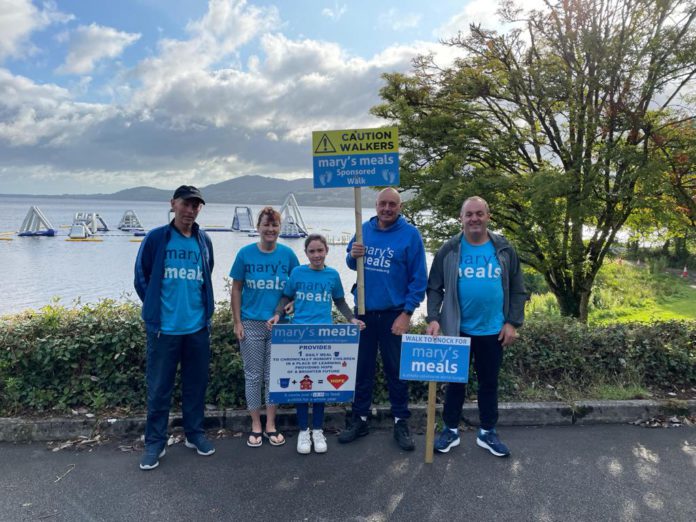 Volunteers in Galway are helping to bring school meals to millions of children around the world with Mary’s Meals.

Mary’s Meals Ireland are celebrating this amazing achievement by asking Irish supporters to raise enough funds to feed the entire two million children for a day.

It costs just 9c on average to feed a child a nutritious school meal, in some of the poorest communities in the world. This amounts to just €18.30 for an entire school year!

One of the local branches is spearheaded by Ger Silke, from Tuam, who describes the joy of everyone involved as contagious.

“It’s simple,” he explained, “we don’t just want your two cents worth – we want your nine cents. If every person in Galway gave just nine cents, we could provide a nutritious school meal for 258,058 children.”

Last month Ger and others walked 200km in aid of the charity in the Step by Step to Feed the next Child fundraiser.

The campaign runs from September 8 – October 31. Full details can be found on their website www.marysmeals.ie.

There are many ways to get involved; from sponsored walks to scrap metal collections, and everything in between, the ingenious supporters of Mary’s Meals have come up with hundreds of ways to get to this extraordinary milestone.

With such a small amount having such a large impact, it is a great cause for schools, families and businesses to get behind.

The charity had humble beginnings to say the least: a one-off good deed from a shed in the Highlands of Scotland eventually led to a small school feeding programme in Malawi, aiming to bring vital meals to around 200 children.

Now more than 30% of the primary school population of Malawi enjoys the nutritious meals, served in schools by local volunteers to help the next generation build a brighter future.

“When we set out on this path, nearly 30 years ago, we were overwhelmed by people’s goodness in donating – and that’s been the story ever since. I thank you with all my heart on behalf of each of those children”.

When schools closed because of the Covid-19 pandemic, Mary’s Meals continued to reach almost every child enrolled in its school feeding programmes through community distributions of food parcels and essential hygiene items.

Ensuring our work didn’t stop at this challenging time enabled parents or guardians to cook daily meals for the children at home, in their temporary place of education and reduced household hunger and fear.