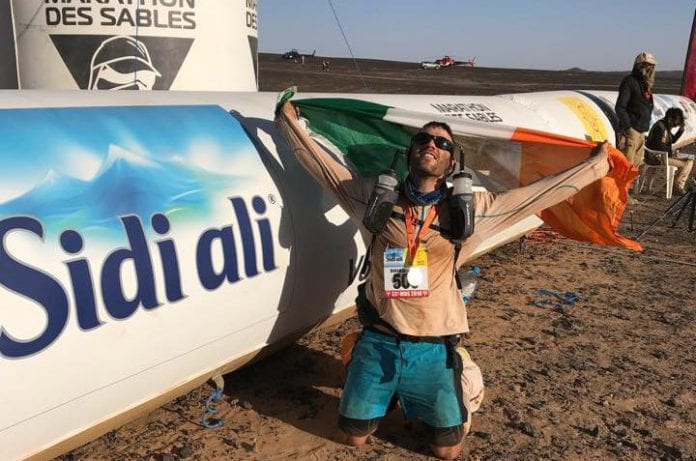 From the Craggy Hills of Connemara to the Sands of the Sahara, Galway man Brian Keane has been through it all. Starting off with GAA as young lad, add in body building, throw teaching into the mix, becoming a fitness instructor, obviously there was going to be room for 6 marathons across the Sahara Desert as he attempted Marathon Des Sables.

Connemara man Brian Keane, took to the Sahara desert last month in an effort to raise funds for LauraLynn.

Laura Lynn is a hospice for children with life-limiting conditions and residential care for young adults with disabilities. Approximately 140 staff are employed with the teaching, fundraising and care provision departments.

The history of the hospice has evolved over many years from its beginnings in 1925 as a convalescence home from children from the inner city to the recent opening in 2011 of LauraLynn House a dedicated 8 bed children’s palliative care unit. You can find out more about Laura Lynn here.

Having grown up in Connemara, Brian, who is no stranger to hard work, dedication and challenges decided to moved to California where he initially began working in fitness.

“I was teaching soccer over there and then I moved back to London and qualified to be a primary school teacher and became a personal trainer on the side and effectively worked two jobs for about four years.

“Then I made the switch over into working in the fitness industry full time about six years ago. I moved back to Galway, started up my business from the ground here and did very well very quickly.

“It was going so well that I ended up moving online to try and deal with the amount of people that were looking into the programmes which led me to where I am now.”

Although Brian had always known fitness was what he wanted to work in, something seemed to hold him back before he finally gave in and he’s never been happier.

“I had a weird story where I thought that fitness was my passion and I was afraid that if I worked in it I would lose my love for training and I’d lose my love for fitness so I kind of had this belief that I needed to do a real job and then fitness could just be my hobby.

“Within about 3 minutes of working in the fitness industry, I was like, oh no that’s wrong. Now it feels like I’m not working at all and I’ve felt like that for the last seven years.”

Brian now does all of his work online, which suits many of his clients who have very busy lifestyles and the online works best for them.

“One of the reasons I’ve been very fortunate with the online growth so effectively is down to the fact that I’m working with and serving those people that are living busy lifestyles, so a lot of workers, a lot of people with families, a lot of GAA players are coming through the programme.”

He has no qualms with this and is very eager and happy to meet all of his clients needs, so be that a 6am check-in or a 6pm check-in, he will be there.

“I heard about it first when I was at an event in Amsterdam at the Tony Robinns mastery event and I met a guy there who actually since then has become a close friend from Dubai and he was telling me about this run in the Sahara that he did.

“It’s 256km in total where you’re running through the Sahara. It’s self-sufficient and it’s over 6 days.

“It’s a marathon every day with a double marathon on the Thursday. It’s back to back marathons in the Sahara and it’s self-sufficient so you bring your own food, your water is rationed and you’re basically running through the Sahara with a thousand other people from all around the world.

“There’s a lot of Moroccans, a lot of African runners, so I was about 20-25 kilos heavier than nearly everybody else there.”

Brian had to go through intense training in order to prepare himself for the journey that was ahead of him in the Sahara desert.

“I started training for it in August. I did my first 2km run and I nearly got sick because it’s not my background. I’ve played GAA all my life, played football and I’ve done sport, but I never done any steady running.

“I hadn’t done any running for 2-3 years before that and I nearly got sick after 2kms,” he laughed.

“I gradually built that up, I went from 2km-3km,3-4,4-5 and kept building it up and then ran my first marathon in January of this year in Dubai.

“I wanted somewhere with the heat. I ran that with a backpack and I ran it in a hoodie to try and prepare myself because I’d never done a marathon. I’d never done that distance so I did that, finished that and felt more confident in going to the Sahara.

Brian flew out to Morocco on the 6th of April and then began the marathon on the 8th for six days straight. Although he was mentally prepared for it, he couldn’t foresee what it would actually be like or what would happen until he got there.

“I was mentally prepared going over but physically it was the most demanding thing I’ve done by the longest shot.

“You’re feet are mangled – you’re in the Sahara, it’s like running through snow as it’s coming up to your knees and you’re then drained by the heat. It’s something like 40-50 degrees during peak times and you’re doing that back to back for 6 days.

“You’re carrying all your food on your back for 6 days and I’m 84 kilos, I was a body builder before, I competed in bodybuilding for like 2 years, so I’m a pretty big guy and I had about 20-25 kilos on most people there.”

Even though it was mentally and physically draining Brian has acknowledged that it has helped him in certain aspects. It has reaffirmed his ideology that all one has to do is take the first step in anything in life.

“There’s times when you’re barely moving. I remember on the long day, on 86 kilometers, the peak time was between 12pm and 3pm and we were running over this kind of sanded lake, so because of the heat the lake is no longer a lake it’s like rock sand and you’re moving at a snails pace because of the heat.

“It’s 40-60 degrees, you’ve got all your weight on your back, you’ve only got a small amount of water that you’ve got to ration so once you’re moving in the right direction even if that’s at a snails pace – that kind of reaffirmed that and it’s a message I bought back telling people – it doesn’t matter how slow you go when you feel good.”

The Sahara has helped Brian immensely in his every day rituals but it has also helped him to realise how grateful he is to have an actual home.

“We had a sandstorm on the second night which blew away our tent. We’d a tent set up and they were stuck down by poles and the sandstorm came and took it all away. We had to go into our sleeping bags and lie on top of our bag with all our food because the sandstorm would have taken it.

“I’ll never be more grateful for four walls and a roof. Every night since I’ve been home I’m just like oh my god, I’m so happy to have a roof and four walls so that’s another little take home I got.”

Brian has had an amazing journey through the Sahara desert and even though his feet were completely mangled, they were so bad that he need poles to walk on his last day, it didn’t matter because he was doing it for such a good cause, LauraLynn

If you want to know more about Brian Keane, you can head over to his website, or his Facebook page or send him an email at brian@briankeanefitness.com if you have any fitness related questions.