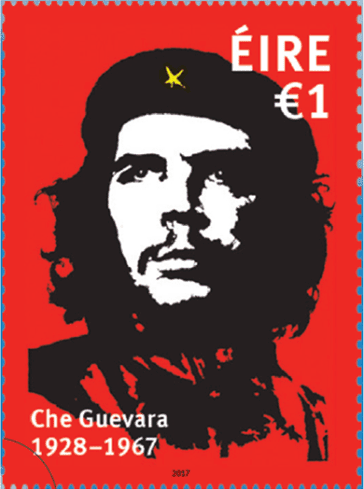 Che Guevara was descended from the Lynches of Galway.

An Post’s new stamp featuring the iconic artwork by Irish artist Jim Fitzpartrick of Che Guevara has been met with both praise and criticism.

It commemorates the 50th anniversary of the execution of the guerrilla fighter.

Che Guevara had ancestors from Galway, dating back to the 1700s, when Patrick Lynch emigrated to Rio de la Plata. The Lynches were one of the fourteen ‘Tribes of Galway’.

His father, Ernesto Guevara Lynch is reported to have said “the first thing to note is that in my son’s veins flowed the blood of the Irish rebels.”

In Cuba, the revolutionary helped overthrow Fulgencio Batista, the US-backed military dictator, who was bringing widescale chaos to the island, instilling fear into the Cuban people through torture and public executions.

Che Guevara also fought in other conflicts around the world before he was finally captured and executed in Bolivia in October 1967.

But the stamp, featuring the iconic image on a red background, has (predictably) received a mixed reaction.

An Post’s Che Guevara stamp to commemorate his 50th Anniversary.

Go to your Post Office, ask them not to stock a stamp commemorating child murderer homophobe Che Guevara#NotCheStamp

An Post- Che Guevara stamp! Fab idea! Next can we see a Stalin in the postbox? Then we can go for a nice Mao Zedong..a cheeky Pol Pot maybe?

Commemorating the 50th anniversary of Che #Guevara the best stamp ever. pic.twitter.com/0iKPeC14S8