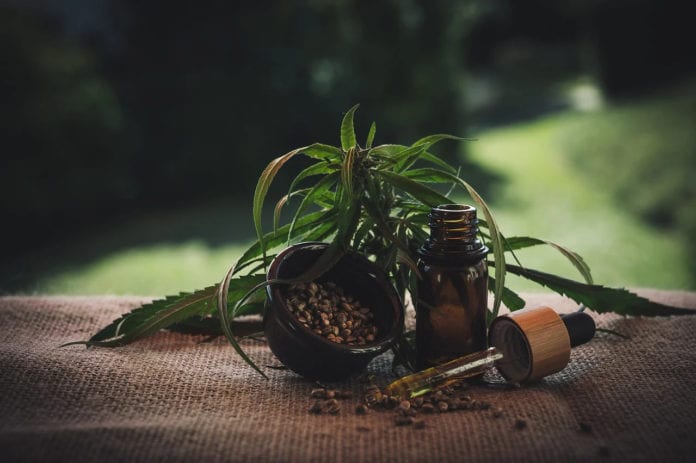 When something new comes into the public consciousness, an idea, a service, or a product, it often spends a long time in the background, before suddenly gaining a surge of momentum. Such is the case with CBD oil and other products which are increasingly available all over the country.

CBD, short for Cannabidiol, is a derivative of the cannabis plant, but one that is noticeably different from the plant’s more infamous usage in that it isn’t used to get high.

CBD oils and other products deliberately don’t contain the psychoactive ingredient in cannabis, THC, which remains illegal in Ireland and elsewhere.

The first CBD product that became well known, and the one that people are still most likely to have heard of, is CBD oil. But as with any trend, this has quickly ballooned to include many other goods citing it as their crucial ingredient.

CBD pastes and facial creams, as well as food and drinks such as coffee and teas, have become very popular wellness products in recent times.

Ireland has a tendency to pick up new trends a few years later than many other countries, usually coming in the form of ideas shipped across the Atlantic from the US.

And while CBD oil has been growing in popularity in the States for quite some time now, it’s really only in the past year or so that it has begun to make its way into the public sphere here in Ireland says Brian Cusack, owner of the online store Dr Hemp Me which sells Irish CBD Oil.

He’s been in business selling CBD oil since late 2018, having previously worked in the banking industry. Despite the negative associations people sometimes have with people promoting hemp or cannabis products, that they’ll take any opportunity you offer, and some you don’t, to talk the topic to death, Brian didn’t get into this to be a culture warrior.

Rather, he’d always wanted to open his own business, and after finding that his most recent position at Citibank was just “not really the job I thought it was going to be” a few months in, decided that now was the time to make a change.

“I think like anybody who wants to be an entrepreneur, I just got sick of working for someone else,” Brian says. He adds that it helps that it’s now easier than ever to set up an online business once you familiarise yourself with the SEO skills that are needed to work the labyrinthine ranking systems of search engines.

He chose CBD as the business to get into in part because the opportunity was there. There were some businesses set up in Ireland already, but it was hardly an entrenched industry.

Beyond that, Brian and his girlfriend were both already using CBD oil for different reasons. He started using it to go with his training after hearing about it for the first time watching a press conference before a UFC match.

Dr Hemp Me started trading in September of 2018, and has become a successful vendor, shipping its CBD oils which range in strength from 5 to 40 percent, to customers all over Ireland.

In the past few months Brian has also expanded into the UK market, which already makes up around 10% of sales, and hopes to start selling to customers around Europe as well.

While many countries have embraced, or at least clearly allowed the sale of CBD oils and other hemp derived products, the situation in Ireland has remained some murky even as stores have popped up in towns and cities nationwide, as well as online.

CBD oils and Hemp oils are not illegal under EU regulations, as long as the hemp plants it is made from have a THC content, the psychoactive element, of less than 0.2 percent.

CBD products that fall below this threshold can be sold as food supplements in Ireland, governed by the Health Products Regulatory Authority, albeit one that is slightly different from other food supplements in that people selling CBD oil are not allowed to make any claims of health benefits from the products, period.

The confusing status of Irish law on the subject can mean there are a lot of hoops to jump through for anyone who wants to go into business selling CBD oil.

It’s easier for someone that just wants to be a vendor for other people’s products, but because Brian was setting up his own brand with Dr Hemp Me, it involved talking to the Food Safety Authority, the HSE, and the HPRA, and getting punted back and forth between them.

“Being honest, they kept pushing me around to other departments. They kept saying ‘this is not our problem’ to the point where I was like, I don’t know what I’m going to do”.

But registering with the HSE’s Environmental Protection Officer, and his membership of the Cannabis Trade Association has helped ensure that Dr Hemp Me is firmly within the boundaries of the law Brian says.

Even as other businesses have found themselves subject to garda scrutiny and seizures for going beyond what is permitted under Irish and EU law in the past year or so.

The CTA helps keep the industry on the straight and narrow in Ireland and the UK both by lobbying for the protection of CBD’s status as a legal food supplement, and by making sure that businesses don’t make unproven claims about what it can do for you.

“The way they view it is that if companies are making these big claims, then they’re the ones that are going to get it shut down for all of us.”

Ireland can be slow to change its perceptions or stigmas attached to things considered taboo, or shameful. And CBD does suffer from some stigma due to being associated with cannabis, even if it ultimately has little to nothing in common with the marijuanna that people smoke.

That has begun to change in recent years, something the internet has helped greatly Brian says, as younger generations are exposed to a greater array of perspectives. Both from outside of Ireland, where CBD has been commonly used for far longer than here, and from the growing number of people in Ireland taking it for anxiety or inflammation.

“When I was first setting up the website and selling CBD I was always getting jokes from people that ‘oh you’re a drug dealer’ you know, ‘a legal drug dealer’”. They were just jokes, he adds, and never meant accusingly, but still, “I never hear that now”.

But it’s not just young people who are interested in CBD, as many people from an older generation have also shown great interest in trying it out, including Brian’s own aunt and mother.

For Brian, part of making people more comfortable with seeking out information and trying out CBD has been making sure that he’s there to provide first hand information through an instant chat on his website, often taking people’s questions well into the night, long after even most self-employed people would call an end to the working day.

“People want to ask questions about it. There is still a little bit of a stigma, so they just want to make sure of a lot of things.”

This also just makes good business sense, since “if you’re not there to answer questions, they’re going to go off and ask someone else.”

For Brian, the biggest concern for the future of the CBD industry isn’t that it will get shut down altogether, but that it could be all put under the same umbrella as medicinal cannabis products in the future.

The government is currently running a five year Medicinal Cannabis Access Programme, with a strictly regulated number of vendors able to provide CBD oils with a THC content considerably above the 0.2%.

These can only be prescribed by doctors for a very limited number of conditions such as epilepsy, multiple sclerosis, or chemotherapy associated nausea. And even then, only when all other treatment options have failed.

While Brian acknowledges that the medical data which could come from this pilot scheme would be helpful, the government should “keep hemp out of it” when discussing the future of medicinal cannabis in Ireland.

Putting all vendors in the CBD oil Ireland industry in that same category would put a lot of people out of work if they have to operate under a much stricter regulatory regime, he warns, sellers and hemp farmers alike, causing a knock-on effect for customers as well.

“A lot of people are getting a lot of benefits from the food supplements from the fact that they have such ease of access.”