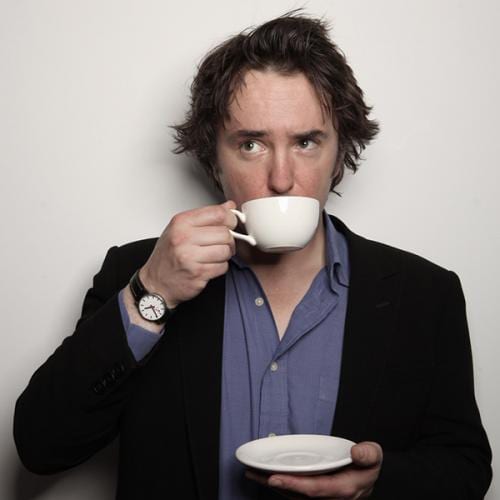 At the best of times, Dylan Moran’s comedy is a perfect mixture of insight and disgust about the world and our lives in it.

At the worst of times – such as a first performance with a glitchy mic, a late start, and a lack of tea – he still manages to keep the laughs rolling in.

The Vodafone Comedy Carnival kicked off in Galway last night with Moran headlining in a four-day run of his new show, Dr. Cosmos.

And maybe it was the almost-full moon seen rising over Galway Bay from the Leisureland venue, but it seemed almost every little thing went wrong.

For one thing, hundreds of people were all clamoring for drinks at the tiny bar before the show, which resulted in a delayed start.

A much more serious problem was a mic that kept cutting out – sometimes at exactly the wrong moment.

Moran joked at one point that it had a great sense of comedic timing after it failed right at the punchline.

He did an excellent job of keeping spirits high, giving a running commentary as he wandered behind the curtain in search of better equipment.

“Can I use that one? No? No! That’s a *bad* one,” he said in a tone that – much like the rest of his comedy – was somehow both childlike and curmudgeonly.

And during the interval his mug of tea – a healthier replacement for his regular glass of wine – was misplaced, resulting in a surreal moment where he was forced to sip straight from the spout.

But in spite of it all, Moran’s demeanor and quick quips managed to sustain the hilarity of the evening.

His new show is more measured and mature than his previous stand-up efforts, which adds a pleasing philosophical dimension to his familiar flights of fancy.

In trademark style, he flawlessly blends wide-eyed innocence with grumpy pessimism in tirades on middle age, the internet, family life, and the culture shock of coming back to a modern Ireland after growing up in county Meath in the 1970s.

He alone is able to add just the right tone to a simple question – “What is this, a Tuesday?” – with a mixture of surprise, dread and confusion that keeps audiences coming back for more.

And he knows just how to win over the locals, with seemingly off-the-cuff remarks about the Galway vibe and cheap jibes about Leitrim.

Although occasionally thrown off his stride by the mic mishaps and understandably frustrated by the end of his set, Dylan Moran was still fantastic – and it can only get better from here.