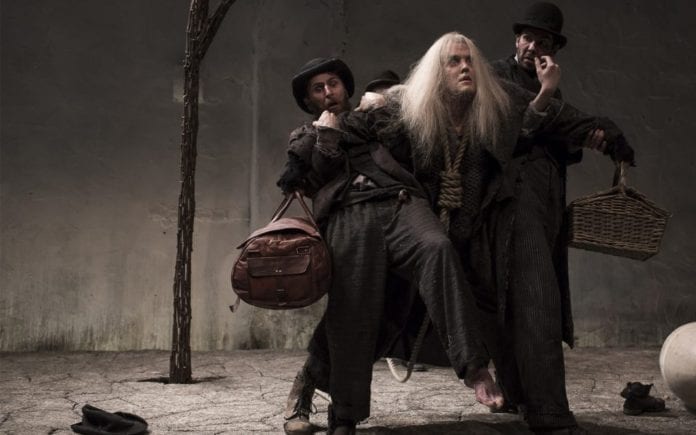 Druid Theatre’s strangely hilarious take on the Samuel Beckett classic ‘Waiting for Godot’ is killing it at the Edinburgh International Festival this week.

Regarded as the pinnacle of Samuel Beckett’s obsession with futility, Waiting for Godot sees two world-weary friends sitting on the side of the road, talking about everything and nothing.

The only constant in their lives the general unfairness of the world to them, and a rock hard certainty that there’s “nothing to be done” about it.

In a play that is famed for nothing really happening, Estragon (Aaron Monaghan) and his good fellow Vladamir (Marty Rea) make grand ceremonies out of the smallest of actions (putting on a hat or a shoe, then taking it off again. Mad lads) and can even squeeze a chuckle out of a debate on the practicality of hanging yourself from a spindly branch.

While the Edinburgh Guide heaps praise on the Druid for having: “homed in on the play’s inherent humour and raised it to Chaplinesque heightened comedy with stylised gestures from the all Irish cast.”

“This is Beckett revealed even more than he has been over the last few years as a comedian extraordinaire.” says The Times.

Vladamir and Estragon cross paths with Pozzo (Rory Nolan), who chews the scenery with such intensity you might think he plans on regurgitating it for a gaggle of baby birds, and his slave Lucky (Garrett Lombard), quite simply the most wretched character ever written.

Tony award winning Director Gerry Hynes focuses in on the absurdity of Beckett’s writing, the endless babble might seem inane and in another set of hands could be used to lull you to sleep or a deep depression, but combined with Monaghan and Rea’s exaggerated performances you just can’t look away.

And set designer Francis O’Connor matches the emptiness of the story with one lonely, dead tree, a worn down rock for a seat, and a strategically placed shoe on a dimly lit plain.

Regarded as one of the finest ever productions of Beckett’s masterpiece, since the Druid brought it to life it’s won multiple Irish Times Theatre Awards

Waiting for Godot was home in Galway last February and March and is playing this week at the Edinburgh International Festival August 3 – 12 at the Lyceum.

Afterwards it’s back across the Atlantic to New York where it’ll be showing at the Lincoln Centre’s White Light Festival from November 2 – 13.