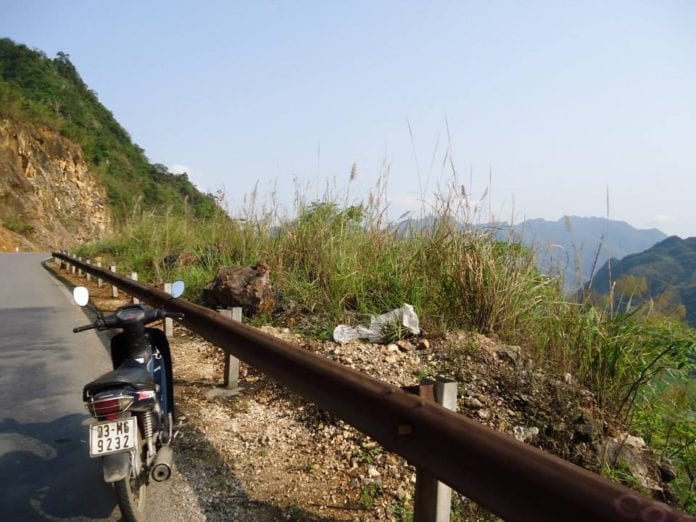 The ice that I asked for melted all too quickly in my glass of sugary iced tea. I sat on the bench, trying not to look too much at the skinny arms of the old man in his white tank top as he watched me drink.

He was older than my dad and had probably fought in the war, maybe even killing many of my countrymen, something I rarely thought about since moving to Vietnam.

Most of the people here were born after the war – perhaps that’s why all seems to have been forgiven. Foreigners are generally welcomed, particularly their money.

“Okay,” I heard a shout from next door, where a young mechanic with a pock-marked face was working on my poor aging motorbike. I looked round and he nodded at me.

My bike was running again and I heard him open the throttle to show me that it would, in fact, continue to do so. After I’d downed my drink I walked over and another young man (his brother? A cousin?) showed me an old part, a small piece of wire with a plastic clip on the end. One of the wires was slightly corroded. Was that all?

I’d thought my bike had finally died for good. Earlier this week it stuttered and stopped on my way to teach a lesson at a school nearly outside the city, and I had thought it was the choke.

Opening and closing it a few times seemed to do the trick, although the bike was still iffy in the lower gears, and I made it (slightly late) and back home again. Then yesterday coming home from another far-away lesson I noticed an ominous metallic ringing, as if a piece was coming loose, and barely made it home before the engine shut itself off at my gate. I borrowed my flatmate’s little Supercub for the rest of the day.

When I first bought Dragonfly (I had chosen that name for my motorbike because it’s dark green, makes a strange buzzing sound, and would probably be short-lived, but also because dragonflies are beautiful, even though my bike is anything but) I thought I’d made a terrible mistake.

It cost me $250 right before Tet. I got it off some guy whose ad I answered from Hanoi Massive, a Facebook group for people who live here. He was supposed to sell me a different bike but he told me he found oil dripping out of it and would I like to take this other bike instead? After a quick test drive I agreed.

“My mechanic friend says it’s a very good bike,” he assured me, and I rolled my eyes. But I wanted wheels and was sick of my clunky automatic rental scooter. I talked him down to 5 million dong (he wanted 6) and off I went. It was a few days before I noticed that it leaked petrol.

I’ve had more parts replaced on that thing than I can count – petrol tank, battery, ignition, brake pads, and headlights, among others. I needed the clutch replaced a year ago, but never got around to it, and somehow it still shifts gears. The shocks are completely useless; I’ve had the muffler welded back on three times now, because every time I go over a bump Dragonfly and I both get our bones rattled and the exhaust keeps cracking.

This morning she died on the highway fairly close to my house.

I sat for a while, thinking. Everyone I knew who could help me was working, or on holiday, or sleeping off a night out. My house wasn’t very far, but once I got her there I’d still have to deal with either selling her for parts or trying to get her fixed. Was it worth it? I felt like flinging her off the side of the road, setting her free. I knew, like me, she’d want to go out with a bang, not just die on some nondescript patch of pavement.

A couple months ago, Dragonfly got hit by a tree that fell during one of those fierce summer storms. It took five people to lift the tree off her so I could get her out.

Right after we rescued her I thumbed the ignition with trepidation, but she started right up, without any complaints. She has the most spirit of any inanimate object I’ve ever met. I’ll keep getting slap-dash repairs until she disintegrates underneath me and there is nothing left.

So I started walking. Dripping sweat, inhaling exhaust fumes from buses and cars and other motorbikes, I walked her in rush hour traffic on the side of the highway.

I witnessed an accident, a lady getting knocked off her bike. It was bad enough that she did not immediately get up again, but stayed down amidst a gathering crowd of gawkers and helpers. I kept pushing.

Down a side road, a car splashed me driving through a puddle (where the water came from, I couldn’t say – it hasn’t rained in a while. Best not think about it.)

I walked past garbage collectors’ corner, where the ladies with their wheeled carts and brooms watched me through the eye slits in their dust-colored masks, and past a brand-new soccer field that used to be an empty lot. Past a deserted bia hoi, and past a club that I vaguely remembered, where I once spent a glitter-covered night watching my now-ex-boyfriend play pool into the wee hours.

The first mechanic I found motioned for me to stop after I’d nearly passed by. I stopped the bike and turned it on. Embarrassingly, it seemed to work fine, but he heard the tinny ringing sound and fetched a bolt, screwing it in tightly with a quick smile.

Afterwards he waved off my offer to pay, and I headed off, only to turn around and wheel Dragonfly back when the engine shut off five seconds later.

All of Hanoi was open to me – I’d had to phone in to work because of my mishap, so the rest of my morning was free for me to wander, explore, discover, take my now-working motorbike out for a spin somewhere.

Instead I turned down my alley, and as I did so I felt it down to my bones. “I need to get out,” I said to no one in particular. I need to go.