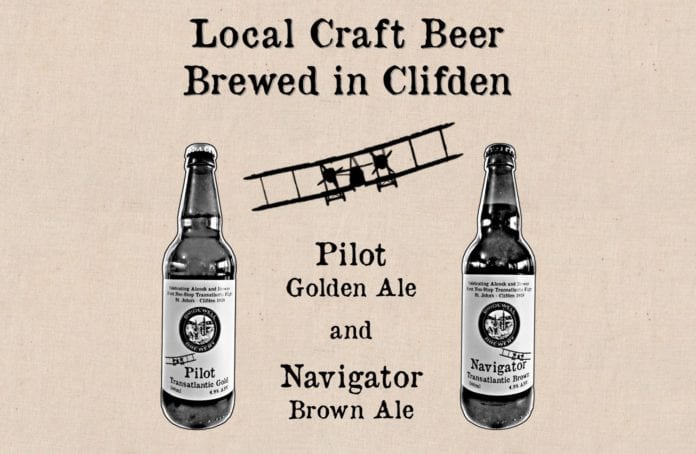 The two limited edition craft beers will be available in the Clifden area all through the summer of 2019, and especially during the centenary celebrations taking place in June.

Pilot is a Transatlantic Gold inspired by American Golden Ales but brewed with the European equivalent of each ingredient.

Navigator is a Transatlantic Brown inspired by American Brown Ales and similarly brewed with European ingredients.

The two craft beers won medals at the Dublin Craft Cup back in March during the Alltech Craft Food & Brews Fair.

James Alcock and Arthur Brown made the first non-stop transatlantic flight in June 1919 in a modified WWI bombers.

They flew from Newfoundland, Canada for the best part of a day through every kind of weather imaginable before crashing down in a field outside Clifden.

During their perilous flight the pair reportedly survived on sandwiches, chocolate, coffee and beer.

To celebrate Indie Beer week, Bridewell are holding a beer tasting in Clifden Supervalu on Thursday, May 23 at 7pm of Pilot and Navigator craft beers.

Have a Wild time in support of COPE Galway

In the spirit of the holidays, the Wildlands Adventure Centre and their new restaurant the Olive Tree Kitchen are holding a festive fundraiser for...
Read more
LIFE & STYLE

Top Tips for a Healthy Christmas

While Christmas doesn’t have a reputation for being the healthiest time of the year, there are a few ways that you can make it...
Read more
BUSINESS

When Helen Griffen joined local online shop Umbrella Eile, the last thing she expected was to feature as the 'poster girl' for their Christmas...
Read more
Facebook
Twitter
Pinterest
WhatsApp