In the last few years, Galway has become one of the fastest-growing areas throughout Europe. With the population expanding each year and city-centers growing, escaping for an afternoon on the greens is always a welcome escape. Even better for golf fans, some of the country’s best courses are close by.

Residents and visitors in Dublin have locations like the Royal Dublin Golf Course, Portmarnock Golf Club, and a unique course at Luttrellstown Castle. Over in Cork, Mahon Golf Course, Cobh Golf Club, and Douglas Golf Club also see large numbers of visitors, as well as play host to major events.

Galway is close behind in terms of quality greens. In fact, the Galway Golf Club hosted the inter-club Cups and Shields week back in 2002. In fact, this club and the neighboring Galway Bay have been featured in the Top 100 rankings throughout the country for the toughness of links and quality of architecture.

Typically, fans are more apt to wager on golf betting odds for events like the Irish PGA Championship or the PGA Irish Club Professional Tournament. But county Galway has stunning courses that are suitable for a range of skill levels. Ready to hit the greens? Here are the top five courses in county Galway, which are ranked according to layout, quality of grounds, and club facilities.

Located on the Atlantic coastline, the courses at Connemara are some of the most rugged and remote in the region. They’re also some of the most challenging, designed in 1973 by Irish course architect Eddie Hackett.

Visitors can challenge themselves to the 7,200 yards across 27 holes. Just be sure to keep a lookout for crags and be sure to mind the wind. Without any sand dunes sheltering from the coast, Connemara will push golfers to their limit.

While not nearly as challenging as Connemara, Galway Golf Club is one of the most classic and storied courses in the region. In 1926, Scottish golf legend Alister MacKenzie finished designing the 18-hole course.

Though his origin greens have since been redesigned, there’s plenty of MacKenzie’s original charm in the parkland track, which features tree-lined links. Beyond the course, golfers will enjoy views of the Aran Islands. Here, the emphasis is on ambiance and relaxation. 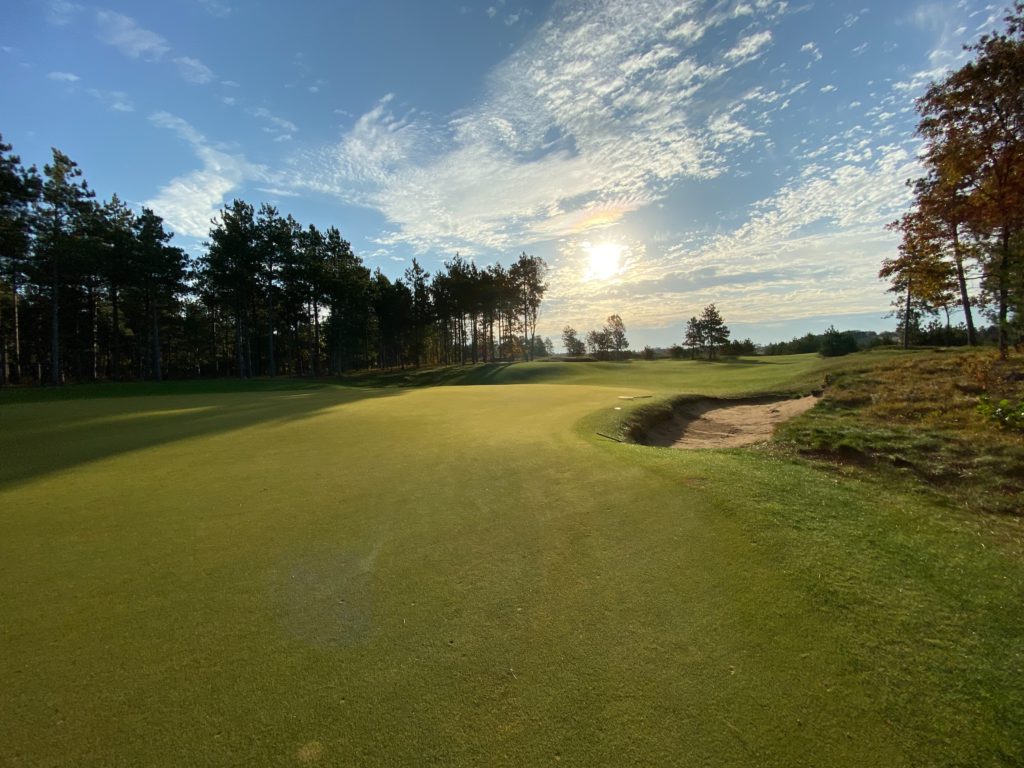 Drawing on both examples above, Portumna combines elements of challenging links and natural wonders. The 18-hole course spreads across a 126-acre property, which overlaps with Coillte, a protected forest. As such, wild deer are regularly seen on the greens.

Mature trees define the course’s character and add to its unique ambiance, which stretches 7,000 yards from backmarkers. With a tricky 17th-hole and a panoramic view of the forest, Portumna is Galway’s hidden gem—though it may not be for long. Back in 2005, Portumna was awarded the best-presented course in the entire province, which has fostered interest from travelers and locals alike.

Just like Connemara, Galway Bay stretches along the coast. Though designed by legend Christy O’Connor Junior, many point out at the course closely resembles American designs, which use larger fairways, mounds, and primly-manicured greens.

Despite the emphasis on looks, Galway Bay is a challenging course that will require golfers to navigate strong winds and keep endurance in mind. The course stretches 7,100 yards, with historic sites littering the grounds, including an ‘ancient ring fort’ near the 16th tee and stone huts near the 13th.

Keep in mind that, unlike other courses on this list, Galway Bay is a resort. The grounds once housed a large, luxury hotel, which is currently undergoing a major renovation and expansion.

Despite being built on lands similar to Galway Bay, architect Robert J. Brown successfully transformed Berna into a moorland track. Even better, it has the same stunning views as Galway Bay. Bearna Golf Club has adapted to challenges like water drainage, which means golfers won’t find very many bunkers on these greens.

In place, there are plenty of other obstacles that will entertain golfers of all skill levels for a full day. The emphasis here is on the natural wonders surrounding Bearna, from the Irish peat bog to the distant islands.