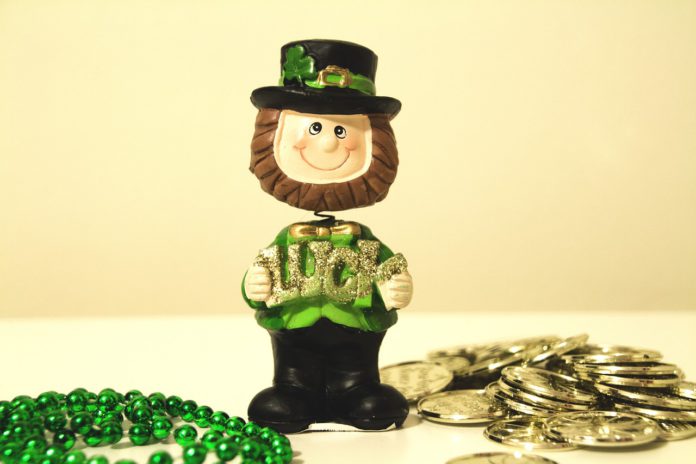 As anyone from Ireland knows, our country is full of redheaded people wearing emerald-green hats, chasing leprechauns to the end of rainbows to find pots of gold. OK, that might not be quite true. But those types of clichéd Irish elements at least help to keep the magic and mystery of Ireland alive. Furthermore, they are perfectly suited as the themes for slot games. Here is a look at five of the best Irish-themed slots that are just as fun as they are clichéd.

The Irish Coins slot game contains pretty much everything you would expect to find in an Irish-themed slot. The background behind the reels is made up of Ireland’s green rolling hills, the hint of a rainbow, and gold coins, framed by a Celtic design. The twenty-payline game also features a traditional-looking lucky leprechaun as one of the reel symbols. The other symbols include other marvellous clichés of the Emerald Isle: a four-leaf clover, a toadstool, and a redheaded woman. A wishing well and a clover-clad coin also appear as non-standard symbols. You can enjoy playing Irish Coins at Casumo online casino. Also, casumo free spins and wilds help to make Irish Coins even more enjoyable.

Another great slot brimming with Irish clichés is Irish Eyes. The five-reel, twenty-five-payline game includes similar symbols to the Irish Coins game: a woman with red hair and a piercing stare, a colourful rainbow, a big pot of gold, and a cheeky leprechaun. Meanwhile, traditional playing card symbols make up the low-value symbols. Irish Eyes features wilds, scatter symbols, and free spins. It is also accompanied by traditional Irish music. So, if you feel like it, you can do a jig while playing this fun but clichéd slot game.

Why try to find one pot of gold at the end of the rainbow when you can search for nine? With the twenty-fixed-payline game 9 Pots of Gold, you can enjoy high-paying wilds, free spins, and multipliers. The game is played on a traditional five-by-three-grid, set against an emerald-green backdrop. Symbols include shamrocks, harps, and leprechaun hats. There is also some head-nodding, foot-tapping Irish folk music to enjoy as you play. So, find out if you have the luck of the Irish by playing 9 Pots of Gold.

Finn and the Swirly Spin

This slot game manages to take traditional Irish themes and combine them with unique gameplay for a very engaging slot game. The cartoony design also helps to make Finn and the Swirly Spin a lot of fun. The game does not follow the traditional slot format. Instead, it takes place on a five-by-five grid in which wins can occur horizontally or vertically, so any three-in-a-row combination of symbols can create a win, regardless of where it happens on the screen. The main character of the game is Finn and the symbols include acorns, wooden hearts, stone spades, and horseshoes.

Although Celtic Courage is still full of Irish clichés, it manages to go above and beyond other Irish-themed slots. That is largely due to the magnificent detailed artwork of mythical Celtic warriors, each of which shapeshifts into animals when you win. There is more of a story behind Celtic Courage than other slot games too. It is up to you to help a red-haired Celtic princess and her warriors who transform into animals to reclaim their freedom. The five-reel, twenty-payline game features wilds, scatters, and free spins. The symbols include the warrior princess herself, a hooded warrior, a cloaked warrior, and a warrior with the head of a lion. The enticing background harp music helps to enhance the game’s Celtic feel even more.