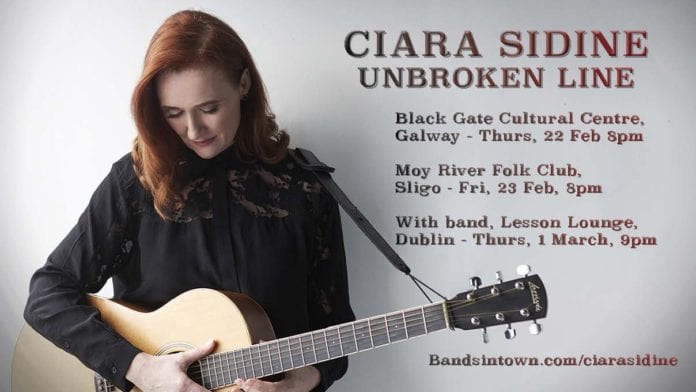 Folk, alt country and blues singer-songwriter Ciara Sidine will be coming to Galway to perform from her new album Unbroken Line. Recently named RTE Radio 1 Album of the Week, Sidine’s latest release was described by Hot Press as “an outstanding second album…a compelling mix of aesthetic brilliance and poignant empathy”.

With a keen eye to Ireland’s recent history and current social landscape, her musical stylings draw from the American tradition, with its astute voicing of socially relevant themes through simple story.

Yet her touch is always light, as she lets the voice speak for itself in a live performance that is as tender as it is tempestuous, always guaranteed to move.

“A great singer, and at times the resemblance to Emmylou Harris is almost uncanny, with the same heartbreaking throaty glory.” ★★★★ ACOUSTIC MAGAZINE

Finest Flower (video below) – an ode to survivors of mother and baby homes and Magdalene Laundries – and Trouble Come Find Me say it best.

Ciara will be playing with her first-class band including Conor Brady, Ciara’s co-producer and guitarist.

“Politically and socially charged, her songs speak of the contemporary and the universal. Sidine’s languid vocal delivery has a way of making even the shiniest, happiest moments teeter with a dark undercurrent.” Siobhán Long ★★★★ IRISH TIMES

“Unbroken Line is one of those rare things, a delightful, captivating release worthy of any modern Americana-roots lover’s attention.” ★★★★ BLUES MAGAZINE

“Pure Americana, a David Lynch soundtrack refashioned in a thrilling new way by a native of Dublin.” – RTÉ GUIDE