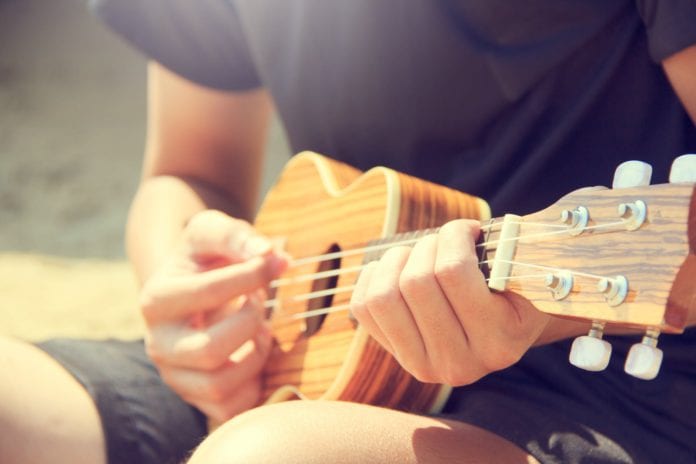 Enjoy a weekend of fantastic music on tiny guitars at the Wild West Uke Fest with great local artists and others who’ve come from further afield.

The three day festival is one next weekend from Friday, September 7 – Sunday, September 8, with musical workshops, fun events on the street, and plenty of great gigs at Munroe’s.

The festival will kick off with a party, as all good things should, at Munroes at 7pm, Friday in the first ever Wild West Ukulele Ceilidh (say ‘Ukulele Ceilidh’ ten times as fast as you can).

Come down to Munroe’s on Dominick street for a night of singing, dancing, and some pretty intense playing. Bring your Uke along and join in the symphony.

An all-star set list is planned with hits like the feel good classic ‘Don’t Worry Be Happy’, the Jungle Book’s ‘I Wanna Be Like You’, the ever quotable ‘Stuck in the Middle With You’, and many more.

That night, head to the follow up concert where Irish Comedian of the Year Steve Bennett will bring his musical storytelling to the stage for a great mix of comedy and music.

Following on from him are local bands Big Jelly and 4 Mile Circus. The nine members of Big Jelly will bring a frenetic beat to the dance floor with their love of Ska & Rock Steady.

Kick off the second day of the festival with a Flash Mob on Shop Street at 3pm as dozens of ukulele wielding artists flood Galway’s thoroughfare,

Watch up close as tourists passing by will surely think they’re about to get to see some kind of West Side Story gang war with Galway’s buskers.

Later artists and groups will go head to head to see who’ll be crowned Uke of the Year 2018 at 8pm in Munroe’s.

Applications are still open for anyone interested in taking a shot at the crown, but there are only a few spaces left so get in quick.

Fresh from the glory of combat by ukulele, Munroe’s will be hosting the Saturday Night Sesh with performances by Little John Nee, Minnie and the Illywhackers, and the Clandestinos.

Little John Nee is a writer and performer from Galway whose musical storytelling for theatre has won him international acclaim.

He was recently elected to the Aosdána, a body created to recognise those who’ve made extraordinary contributions to the arts in Ireland.

You never know what you’re going to get with Minnie and the Illywhackers who have always defied expectations.

They’ve done everything from opening for the bawdy play ‘Girls from Dublin Town’, to performing a Transylvanian themed children’s gig at The Ark Cultural Centre for Children.

The Illywhackers released their first album in 2013 to great reviews and have been a regular on the festival circuit since.

Ms. Minnie made her debut at Glastonbury in 2015 at the Underground Piano Bar, and since they’ve come together they’re a must-see act.

The Clandestinos blend Jamaican roots reggae with the sounds of Latin Manu Chao and the Buena Vista Social Club for something truly unique to the Galway music scene.

If you’ve any energy left after two mental days, the festival closes with a gala session at Munroe’s on Sunday at 3pm.

And for those who might not feel confident enough to get on stage just yet, or are simply looking to pick up new knowledge, a series of workshops will be held at the Galway Arts Centre.

On Friday there’s ‘Wrestling with the Alligator’ a songwriting workshop for the Ukulele, followed by ‘Child’s Play’ on Saturday, an all-purpose instructional workshop for children of all ages.

And for those who struggle to let the beast roar, ‘Let out your Inner Ham’ will teach you how to improve your performing.

For more information on the events taking place, or to purchase tickets for a concert or workshop, go to wildwestukefest.com