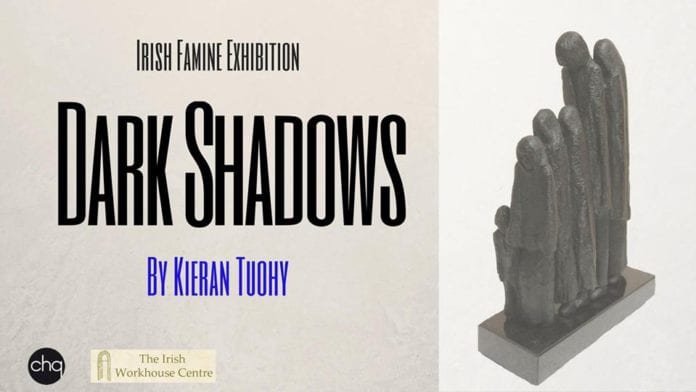 The exhibit features 24 pieces carved from Galway-sourced bog oak, all centred around the theme of the Irish Famine.

Tuohy comes from Galway, although he moved as a child with his family to England for several years. He now resides in Kilcolgan.

“A distant relative of mine actually went to the workhouse in Portumna,” he said.

And as a child at school in London, he learned nothing about the Irish Famine.

Tuohy said: “I didn’t learn about Irish history. At the time of the Famine, Ireland was part of the UK…so Ireland was obliterated from history. It’s not a part of history in schools. I never learned. I went to a Catholic school, and anybody in the school was either Irish or Irish descent. But it was part of the curriculum – they had to teach what was on the curriculum.”

Yet the history of the Irish famine is on the curriculum in Connecticut and New York schools.

“There’s more Irish people over there than there is in Ireland,” he said with a laugh. His pieces have been shown at Ireland’s Great Hunger Museum at Quinnipiac University in Connecticut as well as in Dublin.

Tuohy has been sculpting for over thirty years. His original focus was on mythology – both Irish and Greek – but he started carving Famine-themed sculptures in the 90s, and hasn’t stopped since.

“This exhibition is like a book. There are so many different stories, aspects of the Famine…

“I found it so emotional. It’s easier to get involved in a piece – and I don’t do ten pieces or fifteen pieces in the one go, I do constantly one piece at a time. And so much goes into it.”

All of the bog oak he uses in ‘Dark Shadows’ comes from Galway county, sourced from around Mount Bellew and Ahascragh. One of the pieces was carbon dated to 1705 BC.

Tuohy commented: “I drifted into it years ago. In the beginning, I found it challenging – Well, I still do. I didn’t want to work in the modern timbers, and I wasn’t happy with oak, or the soft timbers…so I did a few pieces in the bog oak. And since then I’ve been trying to bring the bog oak into the art world.

“Most people see it as a craft – as a poor man’s material. But it deserves better.”

And although he carves Celtic and Greek mythology-themed sculptures as well, he always returns to the Famine theme eventually.

“I have to come back to the Famine. It’s something that’s in me. I don’t know – a psychic once told me that I lived through the Famine in a previous life. I don’t know whether I believe that or not, but anyway.”

Dark Shadows, an exhibition of new works by Kieran Tuohy opens at Irish Workhouse Centre – Portumna Co Galway on Friday 6th April. The exhibition will run daily until 9th May. Admission is free and all are welcome.

The Exhibition will be officially opened by Independent Councillor and former Mayor of Galway Mr Noel Larkin.