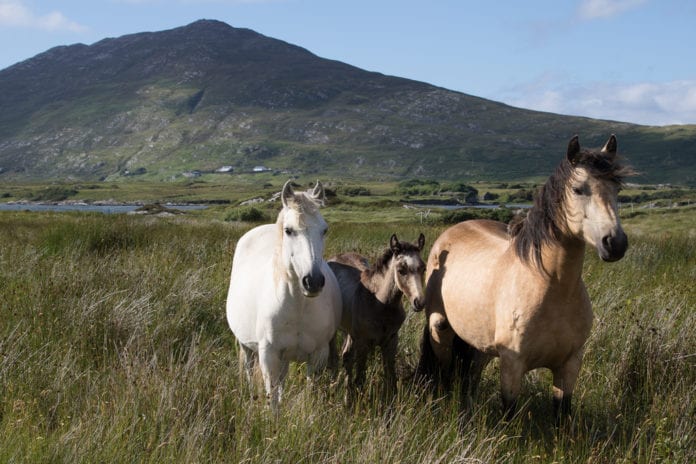 The 95th Annual Connemara Pony Festival kicks off in Clifden today with a full programme of competitions and activities.

Running from Tuesday (today) until Sunday August 19, the festival draws visitors from across Ireland and the world each year to celebrate our native Connemara Pony.

This year will harness the best of Connemara ponies to compete in in-hand, ridden, working hunter and loose jumping competitions, highlighting the versatility of this popular breed.

Although the origins of the ponies are unknown, legend has it that when the Spanish Armada ran aground in 1588 the Andalusian horses bred with the Irish ponies, resulting in a more refined stock.

Wherever they come from, the Connemara pony is now bred worldwide and is renowned for its athleticism, versatility, and good disposition.

The festival starts on Tuesday morning with an organised bus tour to visit Connemara pony studs in Connemara – taking in some breathtaking scenery along the way.

Breeders from all over the world will have the chance to mingle at the International reception hosted by Abbeyglen Castle Hotel this evening.

The three-day competitive events show starts on Wednesday with the return of the popular International Connemara Performance Hunter class.

The next day competitions start at 8am sharp with 19 in-hand classes and 10 ridden classes.

After a long day of activity for both competitors and spectators, the Station House Hotel Clifden will be hosting a Show Dance with live music from 10pm.

The end of the competitions includes five Working Hunter classes and the Clifden High Performance Final on Friday, which boasts a prize fund of €3000.

The last of the competitive events is the exciting Puissance Wall – the current Puissance record in Clifden is 1.63m.

All the winners from across the festival will gather in the showgrounds after the Puissance for the prestigious Parade of Champions.

This traditional lap of honour around Clifden will be cheered on by locals and visitors alike.

On Saturday and Sunday the town will host the annual Connemara Pony market to buy and sell animals.

It promises to be another unbridled success!

For further information on the Connemara Pony Festival or Connemara ponies visit www.cpbs.ie.