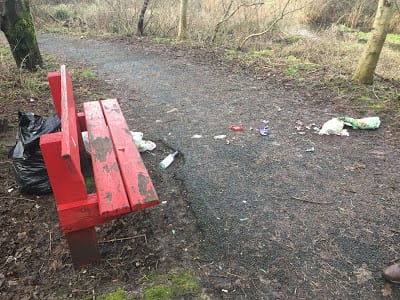 Clean Coasts is hosting its first ever forest clean up at Terryland Forest Park in Galway city this weekend.

Rubbish in our parks and forests is becoming a huge problem, with Merlin Park and Terryland Forest Park being particular black spots for dumping.

It takes the constant effort of volunteers to keep our parks in any kind of a shape where they can be enjoyed by the local community.

The community forest clean up is being jointly hosted by Clean Coasts and Galway Atlantaquaria this Saturday, January 26 from 10am to 12pm and all are welcome to take part.

Clean Coasts admitted this was a unique step for them, as the mostly operate on the shoreline but, “as 80% of marine litter comes from land based sources, it makes sense to raise awareness of this issue.”

Galway Atlantaquaria is a Think Before You Flush Advocate, pointing out that whatever you put down he toilet will eventually make its way to the sea, assuming it doesn’t make vile clog in the sewers.

Terryland Forest Park was chosen by Clean Coasts for a number of reasons, including highlighting how lucky Galway is to have an urban forest in a busy city.

“This is of huge value to many people as it provides a much needed ‘break’ from the hustle and bustle of city life.”

The forest is also notable for the wide variety of plant and animal life it contain, and its economic value to the city as an amenity.

All of that is degraded by rubbish being left lying where it’s tossed.

A recent community clean up at Terryland Forest Park removed 59 bags of rubbish collected over a two hour period.

Keeping our parks clean has become a hot topic lately as local environmentalist Brendan Smith led a protest outside city hall calling for dedicated park wardens to keep them clean.

That is due for consideration at a meeting of Galway city council on February 4.

In the meantime its up to concerned citizens to look after our green spaces, so if you have time on Saturday morning be sure to come by.