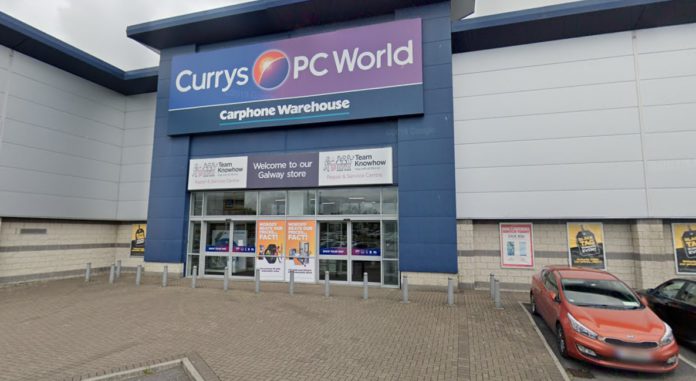 A shoplifter used a young child as a distraction to help them steal two tablet PCs from Curry’s in Galway City.

Terrence McDonagh (32), with a former St Enda’s Park, Beecham, Ennis, pleaded guilty to two counts of theft at Galway District Court, for which he received a six month sentence.

The court heard that shortly after midday on March 5 of 2016 a man entered Curry’s PC World on the Headford Road with a young girl.

While there he disconnected the security locks on two tablets, while making it look as though they were still connected, and then left the store.

He returned a short time later, this time with a young boy. While the boy created a distraction, he placed the two tablets in his jacket and left with them.

The combined value of the two tablets, which were not recovered, was €1,800. McDonagh was identified off cctv footage from the store and arrested.

When questioned by Gardaí he fully admitted to what had occurred, pointing himself out in the camera footage.

Though the events occurred in 2016, they only came to court this month as McDonagh had left the country.

Solicitor Sean Acton said that he should have dealt with it then, but that he left Ireland to get away from his peer group, which was having a negative effect, and to overcome his addictions.

He now says that he has been clean for the past year Mr Acton added.

Judge Mary Fahy said that the chances of the losses being compensated are “absolutely nil”, but that the “most disconcerting” part of the offence was a child being used as a distraction for a shoplifter.

“One can only imagine what’s in store for that young child if that’s the example being set by an adult,” the judge remarked.

She imposed a six month prison sentence for the thefts, backdated to when McDonagh went into custody on February 6.