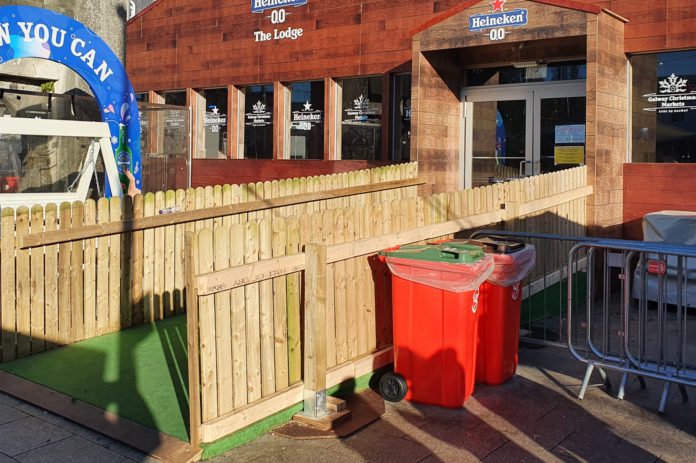 A former bouncer at the Christmas Market Beer Tent in Galway City has been fined for assaulting a customer there in 2018.

Declan Carr (34), of Lissadyra, Tuam was convicted of assaulting a Mathew Griffin on December 13, 2018 after a hearing at Galway District Court.

Judge Mary Fahy said that CCTV footage showing Griffin being forcibly restrained face down on the ground by multiple security guards was alarming to see.

Carr claimed that he only restrained Griffin because he was threatened, and feared for his life after the injured party said that he had a knife and made violent threats against him.

Mathew Griffin told the court that he had gone into the Beer Tent with a group of friends at around 8pm that evening, and that he only had two pints in total that evening, one in the tent and one at the Skeff beforehand.

He said that he went to the bathroom multiple times in the evening due to kidney infection, but that one occasion a bouncer, Carr, told him that he was not letting him back in, despite having the stamp to show that he had come from inside.

Griffin told the court that he tried to explain to the bouncer that he had been doing his Christmas shopping, and that the bags were still inside, but that Carr became more aggressive towards him.

He was placed in a Garda van, and when he spoke with Garda Cillian Fitzmaurice the next day, told him that he had done nothing wrong, and to view the CCTV footage.

Solicitor for the defence Mr John Martin says that while his client did deny him readmission, he only told him to come back in half an hour, and that Griffin threatened him with an alleged knife.

Mr Martin asked Mr Griffin why an experienced bouncer would attack him if he had not been threatened?

Declan Carr told the court that he had been on duty since 6pm that evening, and had seen Mr Griffin going in and out of the Beer Tent several times during the course of the evening.

At one point, a colleague told him not to let Mr Griffin back into the venue. He said that he told the young man to go get something to eat and sober up before coming back.

He denied that shopping bags were ever mentioned, but that after he refused to let Mr Griffin back in he said “don’t do this to me. I have a knife in my pocket, I’ll slit your throat, you and your family.”

He said that Mr. Griffin had one hand in his pocket during their verbal exchange, but that he did not see any knife. Carr said that he feared for his life, and felt that he acted appropriately in restraining him.

Inspector Finbarr Philpott put it to the defendant that he “lost control of the situation”, and had stopped acting as a doorman trying to defuse a situation, but instead as someone with a temper.

Evidence was also heard from the manager of the Christmas Market that year, a Mr. Ronan Hughes, who told the court that he saw someone being denied reentry to the Beer Tent  several times, but could not hear what was being said because of the noise of the market.

Shortly after, he turned back and saw a man being restrained on the ground. When he approached Carr told him that the man had a knife, and that they needed to call the Gardaí.

Garda Cillian Fitzmaurice said that he was called to the Christmas Market around 9:30pm that night in response to an alleged incident.

He found Griffin being held down by three security guards. Garda Fitzmaurice said that he could smell alcohol on his breath, and that he was unsteady on his feet. The young man consented to being searched, and no knife was found.

Garda Fitzmaurice said Mr. Griffin was released without being charged after receiving an informal caution.

CCTV footage of the incident, which did not have any audio, was played for the court. It showed the two men engaging in a short verbal exchange before Mr. Carr pushed Mr. Griffin hard with both hands.

He then tripped him to the ground and restrained him, with multiple other security guards joining to keep him restrained face down until Gardaí arrived.

Judge Mary Fahy said that Carr acted in a “totally disproportionate manner” during the incident.

She added that others on the security staff are as much to blame as him, but unfortunately he was the only one charged and brought before the court.

The judge convicted him of the assault, and imposed a fine of €750. Leave was granted to appeal the verdict.