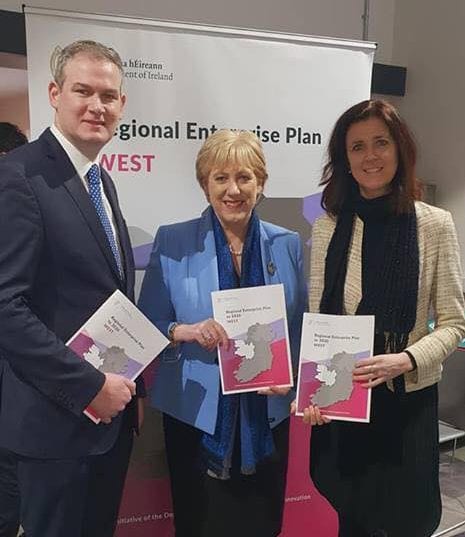 Record numbers of people now have jobs at businesses in Galway supported by Enterprise Ireland, with a 60% increase in the past decade.

The 2019 end of year statement from Enterprise Ireland shows that there are now 8,431 people in jobs at businesses in Galway they support, up from 5,267 in 2010.

Galway West TD and Minister of State Seán Kyne said the decade long run of year on year growth is down to a number of factors including a strong support system.

This includes the Galway Technology Centre, the PorterShed, the Local Enterprise Office and the local Enterprise Ireland team as well as a “relentless focus” on jobs creation.

The Fine Gael TD said that the figures are “hugely encouraging and welcome”, but added that we cannot become complacent with challenges like Brexit in the near future.

Enterprise Ireland is working with its clients to help them prepare for Brexit, and in the past two years has approved funding of €125 million to its most at-risk clients.

The end of year statement was announced today by Minister for Business, Enterprise and Innovation Heather Humphreys, who said that almost two thirds of jobs created by EI are outside of Dublin.

“The companies involved also make a significant contribution to the local economy by sourcing over two-thirds of their materials and services from other Irish firms.”

This strong regional performance is important because we cannot reach our full potential as a country without successful regions.

Nationwide there are now 221,895 people employed at companies supported by the agency, with almost 17,000 new jobs created last year.

Cleantech jobs grew by nine percent, Lifesciences jobs by six percent, Fintech by six percent, Electronics by five percent, ICT and international services by four percent, while jobs in the food sector grew by one percent, reflecting the uncertainty created by Brexit in 2019.

Minister Humphreys said that these results are a “testament to the resilience of Irish companies in the context of Brexit”.

Julia Sinnamon said that there has been a moderation in recent growth, attributing this to the impact of Brexit uncertainty, as well as wider challenges facing SME’s.

“To ensure that our companies continue to grow and create jobs, we need to see an increase in investment in innovation,” she said.

“Our research shows that companies that invest in research and innovation generate 67 percent more in global sales than those that don’t.”

In order to continue sustaining businesses in 2020 Enterprise Ireland will be focusing on helping them to maintain a competitive advantage.