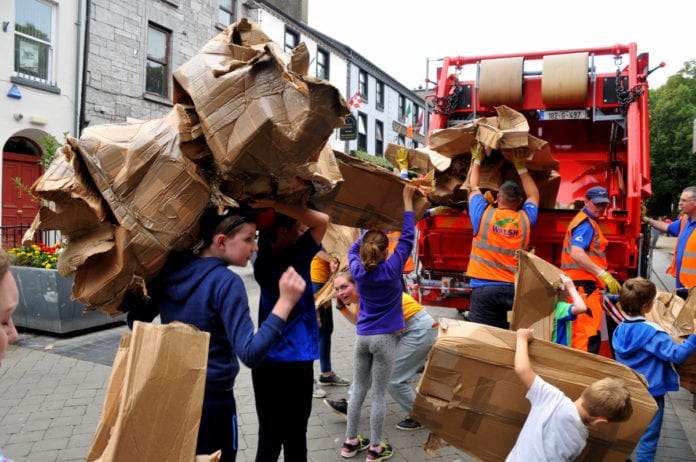 The Oranmore based recycling company Walsh Waste is making a big push for sustainability at the Galway International Arts Festival this summer.

Walsh Waste have been supplying the Galway arts festival since the beginning, starting with just a single bin in 1978.

Over time this increased as Galway International Arts Festival grew to become a national and global phenomenon, with portable toilets services and waste bins added with the arrival of the Big Top in Fisheries Field.

They are back this year to look at how the festival recovers or recycles the waste generated at the festival, with huge amounts of cups, paper, cardboard waste expected to created over the two weeks.

“We are a long-time festival recycling partner and are committed to ensuring all waste is recovered or recycled,” explained Managing Director of Walsh Waste, Gerard Walsh.

He added that Walsh Waste moved away from using landfills for general waste or mixed waste in 2011.

Many parts of the festival are making an effort towards sustainability, with fully recyclable cups featuring at the Heineken Big Top for the first time this year.

One of the major areas for recycling in the GIAF is in The People Build Project, making famous buildings out of cardboard boxes.

Last year Walsh Waste supplied about 4 tonnes of cardboard across two builds, all of which was later recycled.

This year Grossetête and his team, together with hundreds of volunteers, will transform cardboard boxes into a replica of an iconic Galway building which will be erected in Eyre Square.

This structure will be assembled over Friday and Saturday July 19 – 20 and as per last year, it will be demolished the day after on Sunday, July 21.

Of the thousands upon thousands of cardboard boxes involved in this project, “everyone will be delighted to hear that 100% of the cardboard is recycled,” Gerard said.

It is estimated that almost 2 tonnes of cardboard will be used across the build. Once the structure has been demolished, Walsh Waste & Recycling will be on hand to take away the crushed cardboard to be recycled.

“It is our vision to continue providing our customers with the most sustainable recycling options, and in doing so change the way they think about their own recycling practices.”

“We will achieve this through utilising only the most environmentally sound sources of disposal in the market, said Gerard, adding that they are “committed to achieving business success while leaving a positive imprint on society.”

The 42nd Galway International Arts Festival runs from 15-28 July 2019 with an incredible range of music, theatre, street spectacle and much more to come.