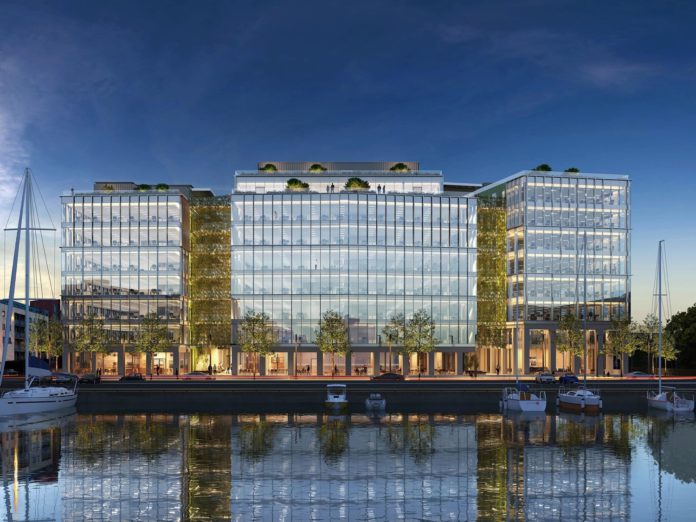 Diligent Corporation has announced Bonham Quay in Galway city as the location for its new European Hub.

The US company announced late last year that it was creating 200 jobs in Galway as part of its long-term business strategy to drive international growth.

Headquartered in New York and operating in more than 90 countries, the modern governance company is used by nearly 700,000 board directors and leaders.

The new campus at Bonham Quay spans 370,000 square foot in total and will be the first in Ireland to adhere to the One Planet Living framework and its ten principles of social, environmental and economical sustainability.

“Our operations in Galway are scaling rapidly with over 100 employees hired in the past few months and plans to grow to more than 200 in 2021,” said Michael Stanton, Diligent’s Chief Financial Officer.

“There is limitless opportunity in Galway to attract great talent from all over Ireland and in selecting Bonham Quay, we are able to offer a modern location for our new employees to work and play.”

Diligent staff are expected to move into the 38,000 square foot Bonham Quay building in early 2022.

“Our ambition with Bonham Quay is to attract world class companies to create employment in the heart of Galway City,” added Paddy McDonald, Director of Edward Capital.

“We are delighted to welcome Diligent Corporation into one of our four buildings. We look forward to working with Diligent and welcoming their new team, as they grow their talent base in the city.”

Ruairí Conroy, Diligent’s Galway Site Leader, said that they decided to build their European hub in Galway because of the excellent pool of talent available locally, and its reputation as Ireland’s most multicultural city.

“As a new entrant to Galway’s growing tech ecosystem, we want to create a work environment that encourages collaboration, inspires creation and brings in all of the natural elements that make this city so attractive.”

Aldi to create over 80 Galway jobs this year