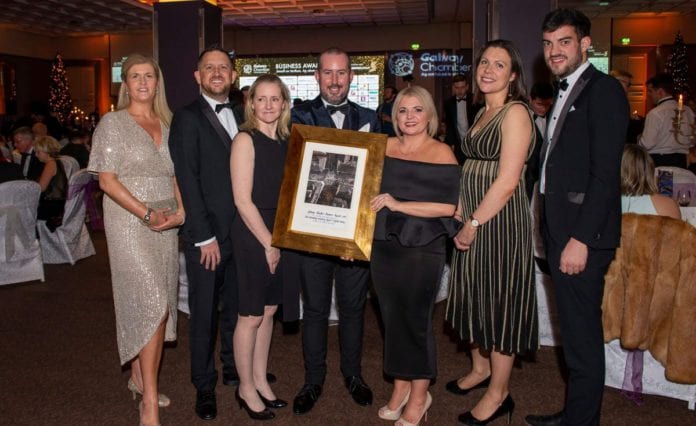 The Connacht Hotel won the award for Best Marketing Including Social and Digital Media, which is sponsored by Galway City Council, for the year long efforts which have gone into celebrating half a century of service.

The Connacht was founded in 1969 as the Galway Ryan Hotel with an ethos of keeping at the forefront of what tourists were looking for in a holiday.

As part of the 50th anniversary celebration the Connacht has been wearing that past proudly this year, gathering stories from the many guests that have stayed there down the years to showcase the experiences created here.

The 50th anniversary celebrations started with a January sale and promotion which reached over two million people across different social channels.

The stories from past guests and employees, including many prominent media and celebrity figures, were also shared, a generated an incredible response of their own from people recollecting their own time at the hotel.

Eveanna Ryan, Group sales and Marketing Manager with the Connacht Hospitality Group said that they are thrilled to have been recognised in such prestigious company.

“Our 50th Anniversary Campaign for the Connacht Hotel was an opportunity to celebrate our history, our loyal customers and our long serving team.”

“Without them we would not have had a story to tell. And winning this award is the icing on the cake for our landmark year.”

The Connacht was nominated by Galway Chamber of Commerce alongside Hero Recruitment and BV Commercial Real Estate Advisors.

The President’s Award on the night went to Professor John Breslin of NUI Galway for the contributions he has made to the startup community in the region.

The Galway Chamber of Commerce Business Awards, now in their 16th year, bring together the business community in Galway and throughout the western region to promote economic growth that benefits everyone.

Kenny Deery, CEO of the Galway Chamber, said that “Now more than ever it is crucial that the business community explore opportunities to work together to drive business for the West of Ireland and ensure that Government , through its Project Ireland 2040 plans, delivers on its promises to drive 75% of growth in regions outside of Dublin.”