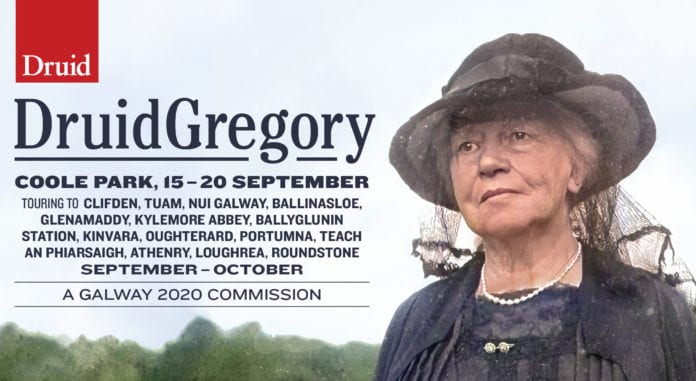 Galway’s world famed Druid Theatre are returning to live performance with a rural tour of Galway centred of the works of Lady Gregory in September and October.

Launching in the magical setting of Coole Park, DruidGregory will will include six of Lady Gregory’s one-act plays, performed by a company of 12 actors and musicians, and directed by Garry Hynes.

This Galway 2020 commission will then take all of Galway by storm, going on a 14 venue, 4 week tour of towns, villages, and iconic outdoor locations around Lady Gregory’s home county.

DruidGregory is coming to many places near you like Portumna, Glenamaddy, Tuam, Ballinasloe, Oughterard, NUIG, Kinvara, Roundstone, Loughrea, Athenry, and Clifden,

On top of that, the tour will feature unique one-off outdoor performances at some of Galway’s world-famous, historic sites such as Kylemore Abbey, Teach an Phiarsaigh and Ballyglunin Station.

“Inspired by the landscape and the history of our beloved home in Galway, we have dreamt up something special for these times,” said Artistic Director Garry Hynes.

“Lady Gregory is one of those people of whom many have heard but few know much about.”

“More than one hundred years ago, she was part of the development of an Irish literary and theatre culture that would express the richness of the Irish nation.”

“This led to the founding of the Abbey Theatre and the subsequent creation of an indigenous Irish theatre.”

“On its foundation in 1975, Druid became part of that story,” Garry Hynes said.

DruidGregory, a series of one-act plays, will make use of music, dance, poetry and song to pay tribute to the extraordinary influence Lady Gregory had on Irish cultural life and growth.

Performed entirely outdoors and fully embracing all restrictions in place due to Covid-19, Druid will launch this ambitious project in the celebrated home of Lady Gregory, in a week-long series of performances amid the paths and parklands of Coole.

Druid is part of the life blood of Galway culture and theatre, and seeing this exciting production come to fruition, despite the challenges we are all facing is testament to their brilliance and resilience,” said Patricia Philbin, CEO of Galway 2020.

“Bringing world class theatre to local communities across Galway is reflective of everything we are trying to achieve, and we’re excited to see it come to life.”

Tickets for DruidGregory go on-sale at 9am on Friday, August 14.