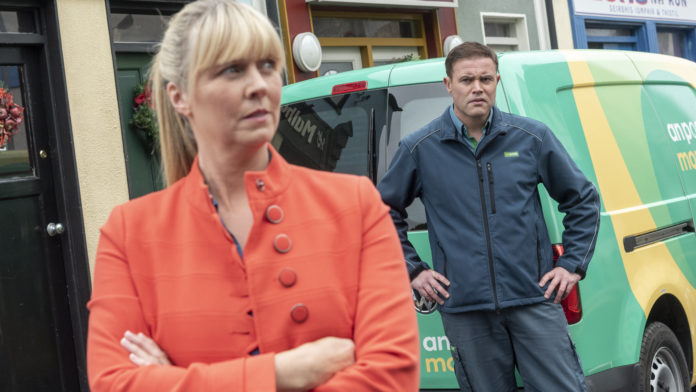 David dither on whether to tell Berni she might be pregnant, Laoise gets a nasty surprise under the floor, and Caitríona gets some incriminating evidence in Ros na Rún.

David is unsure whether to tell Berni that Briain never got that vasectomy, and that she might well be pregnant.

But Annette, tired of his indecisiveness, lays down an ultimatum. If he won’t tell Berni, she will.

John Joe is helping Laoise with work on her B&B, but they get a nasty surprise when he finds asbestos under the floor.

He assures her that he can take care of it. But is that a craftsman’s promise, or due to the fact that the two of them are getting friendlier every day.

O’Shea is worried about the state of her own relationship with John Joe, and resolves to do something about it before it’s too late.

Sadie needs to return Briain’s file before Malachaí realises it is missing, but will she manage to slip it back in time?

Caitríona’s perseverance pays off when a letter written by Mo to Colm expressing unbearable guilt comes into her hands.

What will she do with the truth when she finds out just who killed Frances.

Catch up on all the latest in Ros na Rún in a double feature omnibus of this week’s episodes on TG4 this Sunday at 7:30pm.