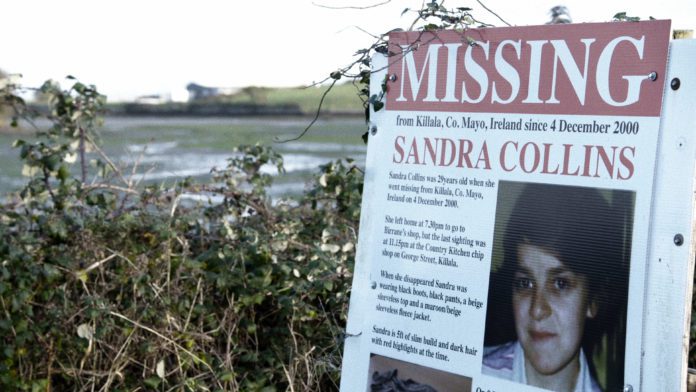 A new four-part crime documentary series on TG4 will explore the murder of Sandra Collins who went missing in December 2000 in Killala, Co. Mayo.

Marú inár Measc, starting next Wednesday 18 May, takes a look at fatal crimes and the effect they have on local communities and the families left without answers.

The first episode features the family of Sandra Collins who left her aunt’s house to buy food in the local grocery shop and never returned home.

Despite relentless efforts from authorities, the community and her family to unearth what happened that night, her disappearance remains shrouded in mystery, and the search for her continues to this day.

A cold case reinvestigation began in summer 2010 and reclassified Sandra’s disappearance as a murder investigation.

In 2014 a local man went on trial for Sandra’s murder, however the judge ruled that there was not sufficient evidence to find him guilty.

Sandra’s brothers and sisters hope that they can one day lay her to rest and find their own peace.

The documentary includes interviews with Sandra’s four siblings, who give deeply personal accounts regarding the life that their sister lived and how her disappearance has impacted them.

This series, produced by Midas Productions, begins on TG4 on Wednesday, 18 May at 9.45pm.