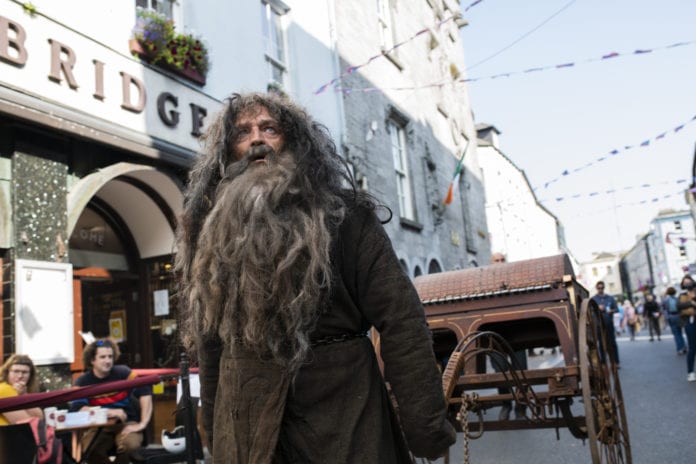 Macnas, the masters of storytelling and spectacle, are back as the legend of Gilgamesh starts to unfold via the Gilgamesh Experience on Macnas.com and on the streets of Galway this week.

The legend of Gilgamesh will play out online in the lead up to the indoor show in March and firmly roots the world of the characters in the city and landscape of Galway.

It all starts here https://gilgamesh.macnas.com/ with the reveal of the first in a series of specially commissioned films by cinematographer Colm Hogan.

And Friday saw the story spill onto the streets with the central character of UTA – the one who cannot die – wandering through Galway, with the same character appearing in a stunning mural which went up overnight on the corner of Bridge Street and Dominick Street.

The coming months will see more surprise, unannounced pop up live moments in the city.

A dramatic new interpretation of the world’s oldest story, Gilgamesh is a Galway 2020 commission for the European Capital of Culture celebrations and sees Macnas take its traditional theatre and storytelling into new outdoor, indoor and digital territories, bringing the contemporary themes of this ancient origin story to life.

Earlier this year AIB was announced as the Official Community Partner of Macnas, helping bring the experience to life. The bank is also the main sponsor of Gilgamesh, a Galway 2020 commission.

The story centres on Gilgamesh, a young tyrannical king who rules the majestic city of Uruk. Superhuman – two thirds God, one third man, Gilgamesh is obsessed with fame.

A  cruel and unjust king, he wants to find the secret to immortality become a God and live forever.

The citizens of Uruk cry out to the Gods for help. The Gods listen and create Enkidu, a wild man sent to challenge and rival Gilgamesh.

Artistic Director of Macnas, Noeline Kavanagh said “Gilgamesh is epic and Macnas does epic so get ready people… Gilgamesh is coming.”

Over the coming months, the Gilgamesh Experience will see audiences follow this bored, beautiful and tyrannical young man in his quest to live forever.

From the city of Uruk to bogs and deserts, from the Underworld to meet the mighty Gods. See him forge battles, wreak havoc on his citizens and meet his match in the wild warrior Enkidu.

Gilgamesh will come alive on your screens, in the west of Ireland where the ancient Euphrates meets the Atlantic Ocean, and burst out onto the streets of Galway city and county.

Audiences can also experience the adventure live and follow the story out into the wilds of rural Galway in December; and in March 2021 see it played out in the Black Box Theatre.

Patricia Philbin, CEO Galway 2020 European Capital of Culture, said “Macnas is a formidable company that has always been exciting and ambitious, pushing the boundaries of theatre and storytelling.

“Gilgamesh is a project which challenges these possibilities even further, working in a new way and exploring new platforms.”

“We are excited to see it unfold across Galway and online as part of our European Capital of Culture celebrations.  Audiences are in for a treat.”