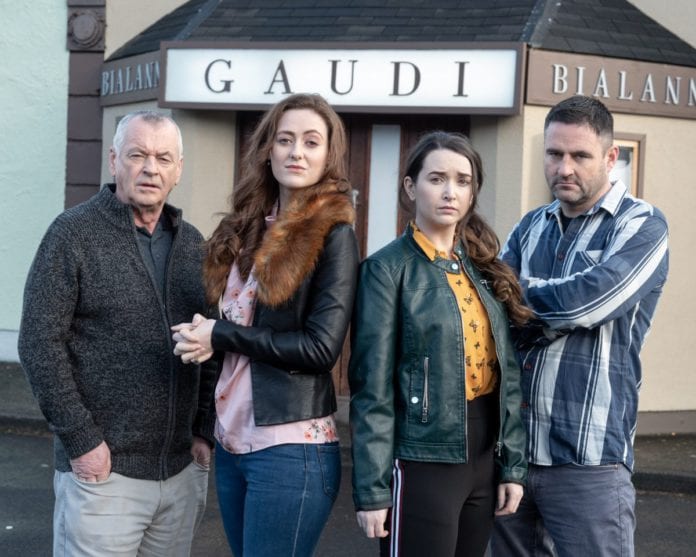 Ros na Rún, Ireland’d only rural TV soap opera, is returning next month with a new season full of deceit, treachery and anguish.

Season 24 of Ros na Rún will debut on TG4 on September 3 at 8:30pm where viewers can learn the fate of the Daly sisters and Mack left dangling at last season’s end.

Can Katy convince her distraught father, John Joe she’s not insane, that it’s her sister Dee who’s coercively controlling her for revenge?

Meanwhile, Jay’s paternity hangs in the balance and viewers will eagerly watch for Mack’s reaction and moves this season.

The Daly family are ultimately being torn apart, as a forlorn John Joe becomes more distraught at his daughters situation.

Ros na Rún has always been a leader in the portrayal of the reality of life in rural Ireland and never shying from the challenges of society and this season is no different.

Modern financial realities like strains of online shopping, another addiction in our society, will be key features of this season.

But other stories will dive into age old conflicts like our need for identity, or finding our birth family, while other characters will become parents.

Old characters return to the village and are set on vengeance which will pose real live and financial challenges to Tadhg, while new characters will be making their debut creating new chapters for many characters including the loveable Bobbi Lee.

The poisonous and conceited Andy will continue to create turmoil and manipulate lives as will Dee, viewers will see Bernie and Johnjoe fighting with their consciences to do right by their families.

Frances is not without torture this season and it’s not just from Tadhg, while Malachi will bridge the gap of kindness for a time with her!

Love, romance, anger, dirty deals, revenge will all form a key role this season with laughter, comedy and much irony at the essence of the storylines.

These are just some of the tales of tangled lives which viewers will get to enjoy in the coming season of Ros na Rún.

“I’m delighted to be back on set at Ros na Rún after a departure with other Irish TV Productions,” says Ní Loingsigh.

“Ros na Rún is the biggest Independent TV Production outside of Dublin with an excellent cast and crew, all of the latest technology in TV production and robust and honest storylines so I’m thrilled to have this opportunity.”

Looking forward to a strong season ahead she said, “we’ll welcome many new characters this season and engage in highly emotive and challenging storylines which will certainly excite our core audience both at home and abroad”.

Ros na Rún returns to TG4 on Tuesday, September 3 at 8:30pm and Thursday the 5th for the Autumn and Winter season with an omnibus on Sundays at 7:30pm.