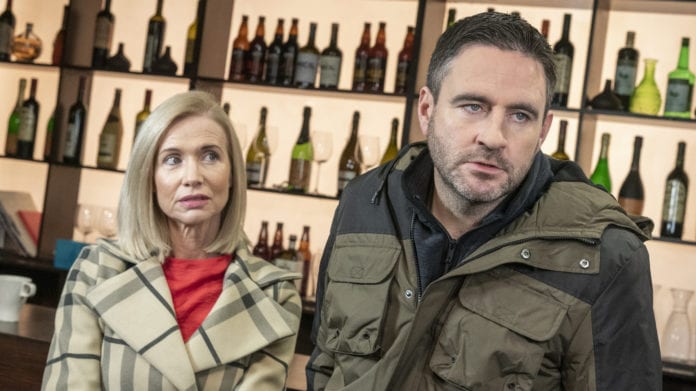 Caitríona’s financial woes drive her to a fateful decision regarding Mack and Sorcha sets a trap for her mother on Ros na Rún.

It’s one things after another for Caitríona, as she just can’t get a break in Ros na Rún. After her accident with Mack the day before, she find out she’s suffering from whiplash.

Vince encourages her to take some time off work, but much to her dismay Labhrás only grants her two days.

Caitríona’s financial problems push to make a fateful decision to sue Mack for the accident.

Has Caitríona gone too far this time, and is this the end of her friendship with Mack.

Nathan is still not happy that Bobbi Lee cancelled their dinner.  He pushes Bobbi Lee to open up about his adoption and her reasoning behind it.

He realises that Jude had a big part to play in this story and he wants more answers.  While visiting Jude, Bobbi Lee makes a discovery that Nathan visited his grandmother on the Aran Islands.

She is shocked to the core, but another heart to heart cements this mother and son relationship. Nathan calls Andy and tells him that he is finished with him for good.

Adam plants a suspicious seed in Sorcha’s head regarding the stolen money, but she’s still in total denial and means to uncover the truth herself.

She sets a trap for Sadia, hoping to settle the question once and for all. Will Sadie fall for Sorcha’s scheme, and what will this mean for mother and daughter?

All of this on Ros na Rún this Tuesday at 8:30pm on TG4, with more to follow each week on Thursday evenings.