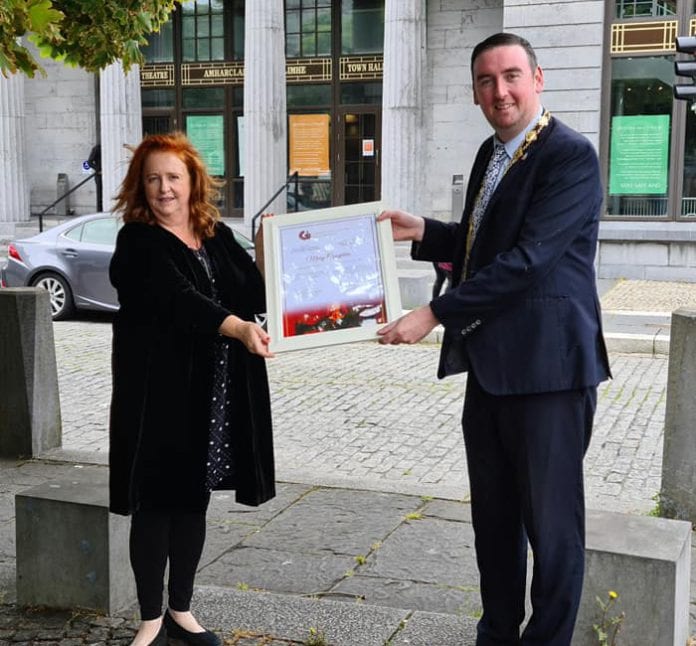 The famed Irish singer and songwriter, and a native of Galway City, Mary Coughlan was presented with a Lifetime Achievement Award for her “immense impact” on the artistic and cultural life of Galway City this week.

Mayor of Galway City Mike Cubbard presented Mary Coughlan with her award on Tuesday outside the Town Hall Theatre.

On receiving the award Mary said she was “honoured and humbled” to be recognised in this way by the Mayor of her home city.

A native of Shantalla in Galway city, Mary career in music has spanned more than three decades and multiple genres including Blues, Jazz and Irish soul.

Her first album, Tired and Emotional, sold more than 100,000 copies in Ireland after its release in 1985.

Thirty five years and nine more studio albums later she is still going strong, a fact spelled out in the title of her latest album, Alive and Kicking, which came out in 2017.

But her contributions to the arts extend beyond just the recording studio. In 2018 she brought a vision of her own life and its trials to the stage in Woman Undone, produced in collaboration with the Brokentalkers and Valgeir Sigurðsson.

Mayor Cubbard commented that “whilst there are many worthy winners, Mary has shown a personal resolve to overcome many obstacles to go on and carve out a career to be proud of.

“It gives me great honour to select Mary for this accolade and to thank her for her contribution to arts, music and culture in Galway”