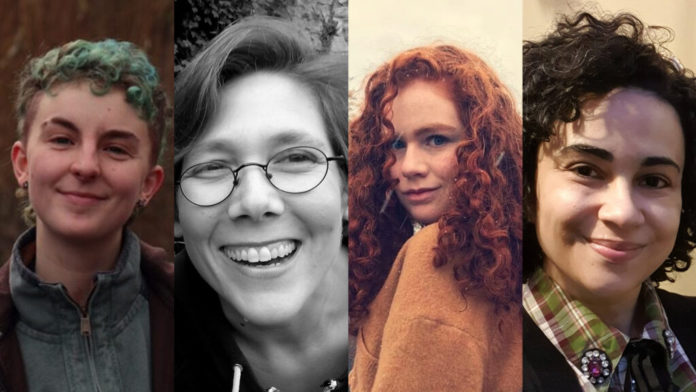 Since its inception in 2006 the New Writing Showcase at the Cúirt Literary Festival has grown to become one of the most important platforms for emerging writers in Ireland.

Also part of the lineup are Murphy and Siobhán Flynn, the winners of the Cúirt New Writing Prize 2022.

Also reading this year will be Flavia Simas who is chosen as part of the new Skylight 47 Open Window project which will, from now on, be an annual part of Cúirt.

Sadhbh Goodwin is a nineteen year old poet from Galway, who has published in the Wild Words anthology and Comhar Óg magazine.

They have been a featured poet at Lime Square Poets and Over the Edge, and write in both English and Gailege.

D’or Seifer regularly contributes her poetry to On the Nail, Filí an Tí Bháin, and Over the Edge.

Her works have recently been published in The Galway Advertister and Skylight 47, and she also co-runs Lime Square Poets, an online poetry gathering.

Hannah Ward produces her works of poetry while attending university. Her pieces have been published in the Galway Advertiser on their Vox Galvia creative writing page, and she has performed at Over the Edge reading events.

Flávia Simas was born and raised in Goiás, Brazil, where she completed her studies and earned a Master’s Degree in Linguistics.

Her work has appeared at the rabble.ie, Elephant Journal, and at the special edition of Skylight 47 published in 2019.

Shane Murphy won the fiction category for this year’s Cúirt New Writing Prize with his story ‘Welcome to the World’.

This year’s fiction judge Lisa McInerney wrote: “A character study that’s compassionate and raw, and a reflection on yearning and identity that was moving and surprising.”

Siobhán Flynn is the winner in the poetry category of the New Writing Prize, taking home the award with her poem “I’m Trying to Write a Poem About an Angel”.

Poetry judge Gail McConnell wrote: “Often the test of a true poem is the reader’s desire to return to it again and again.”

“I liked this poem when I read it first, but I noticed that I kept re-reading it, and each time I did, I noticed something new.”

The New Writing Showcase will take place at the Mick Lally Theatre on Tuesday, April 5 at 11am. Entry is pay what you can.

The MC for the event will be regular Over The Edge host Susan Millar DuMars. All are welcome.