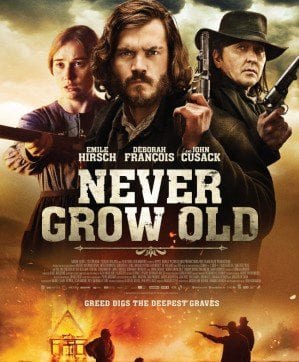 Irish writer-director Ivan Kavanagh’s Connemara shot, California set revisionist Western Never Grow Old may not take the viewer to places they’ve never been before, but thanks to strong performances, evocative production design and timely themes it manages to be a lean, mean and worthy addition to the canon of modern day Westerns.

In the 1840’s western frontier town of Garlow, Irish immigrant Patrick (Emile Hirsch) and his wife Audrey (Deborah Francois) are busy trying to raise a new family, while just about getting by on the proceeds of Patrick’s work as the small town’s resident undertaker and carpenter.

Into this fledgling puritan community – which is ruled over by a  preacher who has banned all the traditional vices that helped make the West Wild – rides Dutch Albert (John Cusack). Albert soon takes over and proceeds to turn the tiny town upside down, filling the once peaceful air with that familiar frontier action of drinkin’, gamblin’ and a whole heap of killing.

Soon, business is booming for Patrick, who can scarcely get all those new coffins hammered together in time to meet demand, but, as we know, there’s eventually going to come a point when a man has gotta stand up for what he believes in…

By and large, Never Grow Old plays it pretty straight and there aren’t too many detours off the well trodden path of the archetypal Western. But what definitely gives the film a certain something is the performance of Cusack as the black hatted Dutch Albert.

Cusack has a had few lean years of late, slumming it in Direct-to-Streaming tripe that would make even Nicholas Cage blush, but here he leaves a strong impression as the villain of the piece.

Dutch Albert is an evil man, but he’s very relaxed about it. Cusack plays him with a weary arrogance, which makes him hard to root for, but impossible to truly dislike. Emile Hirsch provides able support as Patrick, even if some of his hapless attempts at an Irish accent may occasionally curl your toes.

There is an attempt on the part of the movie to provide a bit of commentary on the current political situation in The United States. It’s hard not to read Albert as an intentional Trumpian surrogate, who rides into town and starts to do what he feels like to who he feels like doing it to, but the film isn’t too heavy handed about it.

You don’t get battered over the head with subtext. Mainly this is just a solidly made Western genre film, that wants to tell a familiar story well and with an admirable commitment to blood and guts and taking itself seriously.

Credit is also due to the quality of production design of the picture, which elevates the lived in feel of the interiors and exterior sets of the film, which is no small feat because it was clearly all shot on a minuscule budget.

The cinematography also is above expectations; the colour and tone of the environment on screen may not always look quite like California, but it sure as hell doesn’t look like Connemara either, aside from all that on screen rain, which can give proceedings an umistakably soggy feeling of being close to home. I guess there’s some things in life that just can’t be avoided.