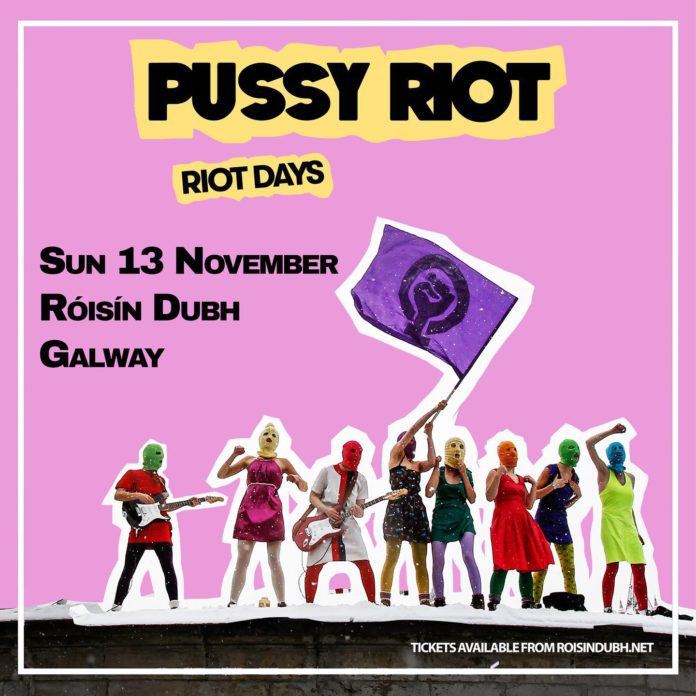 The world renowned protest art collective from Russia, Pussy Riot will be coming to Galway this year for their award winning Riot Days.

The group, which achieved world renown for its protests against authoritarianism, political prisoners, the invasion of Ukraine, and oppressive patriarchy, in Russian and around the world, will be playing at the Roisín Dubh on November 13.

Riot Days is a mix of live music, theatre and video, based on the book of the same name telling the personal story of founding member Maria Alyokhina, her actions in Red Square and the Cathedral, arrest, court, prison.

The show changes up its content frequently, referencing issues such as the prosecution of political prisoners, Russian aggression against Ukraine, and more.

Riot Days has toured worldwide since it was conceived in 2016, with over 300 shows in most of Europe, USA, Brazil, Australia and New Zealand.

Founded in 2011, Pussy Riot first caught the public eye when they staged a Punk Prayer performance inside Moscow’s Cathedral of Christ the Savior in 2012, as a protest against the regime’s close relationship with the Orthodox Church.

Three members of the group, Nadezhda Tolokonnikova, Maria Alyokhina and Ekaterina Samutsevich were sentenced to two years in prison afterwards.

After their release, Tolokonnikova and Alyokhina and several other members performed as Pussy Riot during the Winter Olympics in Sochi, where they were attacked with whips and pepper spray by Cossacks who were employed as security guards.

In the years since then they have released multiple videos such as “Putin Will Teach You To Love The Motherland”, “I Can’t Breathe” (named for the last words that Eric Garner said as New York City Police held him to the ground in a chokehold), “Chaika”, “Organs”, “Make America Great Again”.

In 2021 – 2022 Maria Alyokhina spent more than one year in jail and under house arrest for just social media posts supporting Russian opposition leader Alexey Navalny, who was poisoned and then imprisoned by Putin’s regime.

Tickets for Riot Days with Pussy Riot are on sale now at https://roisindubh.net/.