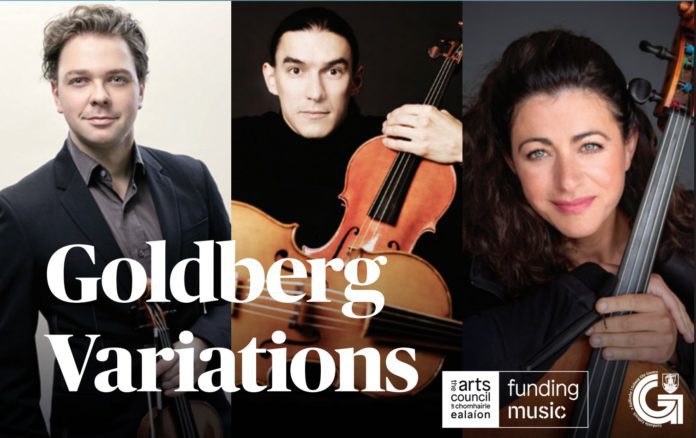 Music for Galway’s latest international concert with a stunning Bach rendition as part of a new initiative, the Galway Encore.

The first concert will take place this Thursday at 8pm in the Emily Anderson Concert Hall at University of Galway.

A second concert will take place the following evening at the same time in Christ Church in Portumna.

Anna Lardi, executive director of Music for Galway said that this is an exciting moment for them, as they seek to make “first-rate classical music concerts” accessible in the wider region.

“Furthermore, MfG is joining the many arts organisations who are becoming more and more conscious of working in a more sustainable way.”

“As we bring three artists from three different countries to Galway we want to get the most out of them, hence the repeat performance in Portumna”.

On top of these concerts, Sergey Malov will also be at the Mall Theatre in Tuam a day earlier, inviting close to 400 children to ‘Meet the Violins’.

The iconic Bach Goldberg Variations were originally composed for harpsichord and are said to have been written to comfort and ease the insomnia of an ailing Count.

The work has become known and loved through performances on modern piano by artists such as Glenn Gould, and infamous as one of Hannibal Lecter’s favourite pieces in The Silence of the Lambs.

The magnificent arrangement for strings was written by Dmitri Sitkovetsky, the uncle of the performing violinist Alexander Sitkovetsky.

Whether in the west or the east of County Galway or beyond, here is an opportunity to experience the joy and calm that Bach sought to conjure as he wrote the Goldberg Variations, performed by world class artists.

“This trio brightened a dark day for us back in January 2021 when they performed at our Midwinter Festival online,” said Music for Galway artistic director Finghin Collins.

“At the time we thought at first that we could have a small audience, but in the end the artists could not even travel. However, their online performance from Berlin was so uplifting that we decided to invite them to Galway in person as soon as possible.”

Tickets cost €20 / €18 concession. There is a reduced price for full-time students and school-going children of €6 and MfG Friends pay €16.

To book or find out about how to join as MfG Friend, visit musicforgalway.ie or phone 091 705962. Music for Galway gratefully acknowledges the support of the Arts Council.

The repeat performance is made possible by the support of Galway County Arts Office and the educational outreach is supported by SAP.