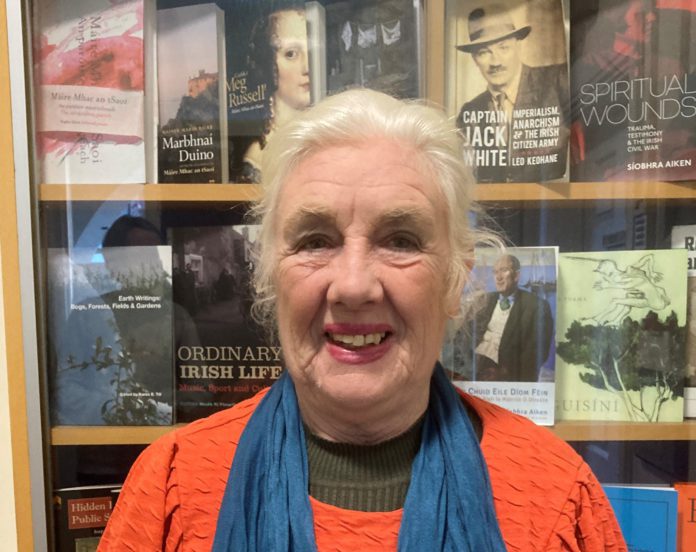 University of Galway’s Centre for Irish Studies has announced the appointment of Máirín Mhic Lochlainn as Storyteller-in-Residence for this year.

Living in Indreabhán but originally from Rós a Mhíl, Máirín cites her father, Beartla Ó Maoileoin as the first storyteller that she heard, and his dramatic renditions have had a long-standing influence on her.

Máirín has won several awards for story-telling including Corn Neidí Frainc at the Oireachtas festival.

Developing the craft of story-telling is a mission for Máirín and she has conducted workshops in story-telling throughout Ireland, Wales and Denmark.

Her story-telling repertoire includes the Scéalta Fiannaíochta and she is delighted at this opportunity to further the development of the craft of story-telling.

“This is a great opportunity for us to recognise the art of oral storytelling and to celebrate Máirín’s particular ability in this area of our native culture,” he said.

“We are really looking forward to working with her for the next year.”

Máirín will teach a series of five workshops the University in early 2023 and a second series in the autumn. The spring workshops will focus in particular on the Scéalta Fiannaíochta.

The five spring workshops, which will be delivered through Irish, are free and open to the public and will run every Thursday, beginning Thursday 2 February, at 7pm at the Centre for Irish Studies, 4 Distillery Road, University of Galway.

This project is funded by Ealaín na Gaeltachta, Údarás na Gaeltachta and the Arts Council, in association with the Centre for Irish Studies at University of Galway.