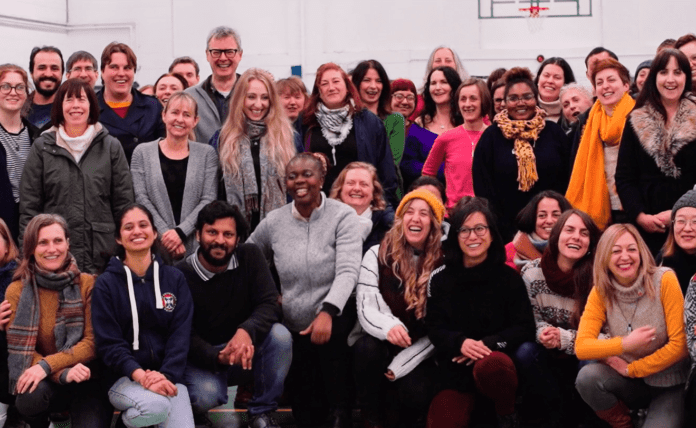 This week is the last chance people have to volunteer to take part in the opening ceremonies for Galway 2020 next month.

Beginning on February 2 in Clifden, the Opening Ceremony for Galway 2020 will spiral inwards through An Spidéal, Tuam, Ballinasloe, Portumna and Athenry on subsequent nights.

The event will come to a crescendo in Galway City on February 8 for a spectacular finale.

Remaining roles in the celebration include chanters, costume assistants, fire carriers and fire handlers. Everyone over the age of 18 is welcome, and all levels of accessibility are catered for.

Music Director David Munro says, “Come along, we’ll give you something to chant if you can’t sing. If you want to sing, there’s plenty of singing [too].”

He added that what’s coming next month will be an experience, “that will never be repeated in your life.”

Excitement is growing among the cast who dusted off their tools last week and resumed rehearsals after the Christmas break.

Teams from Galway City, Clifden, An Spidéal, Tuam, Ballinasloe, Portumna and Athenry upheld the spirit of the City of the Tribes as they met together for the first time.

Show Director Stephen Boyd said, “People who get involved in the casting can expect to have a good time while meeting people they would never meet in regular life, learning new skills, representing their city”.

“The job requires that you introduce yourself and get to know people, and there are always some fantastic friendships that last forever more.”

For those looking to get a toe in the costume design world, Head of Costume Tahra Zafar will give a talk on the specifics of the costume assistant role at Galway Community College this Saturday, 11 January from 10:30am.

Doors open from 9am, allowing a sneak peek at morning rehearsals.

Zafar’s varied experience spans TV, film, music, theatre and events – everything from the London 2012 Olympic and Paralympic Opening and Closing Ceremonies to the fantastical creatures of Star Wars: The Force Awakens.

The Opening Ceremony is produced by Wonder Works, a production company renowned for their work with Rio and Pyeongchang Olympics, and international musicians such as Beyoncé, Jay Z and The Rolling Stones.

In rehearsals, you will be joined by a diverse team in an uplifting atmosphere designed to get you out of your seat and onto the streets.

Boyd adds, “It’s sort of a party disguised as an opening ceremony. There’s going to be music, fire, fun, chanting, call and response, poetry, boats coming in from the sea… It’s the community coming together, having fun with each other, making art and celebrating each other.”

If you can see yourself carrying a fiery torch through the town in the name of fun, or taking part in a swelling chorus of voices, register online to find out when and where your nearest rehearsal will take place.