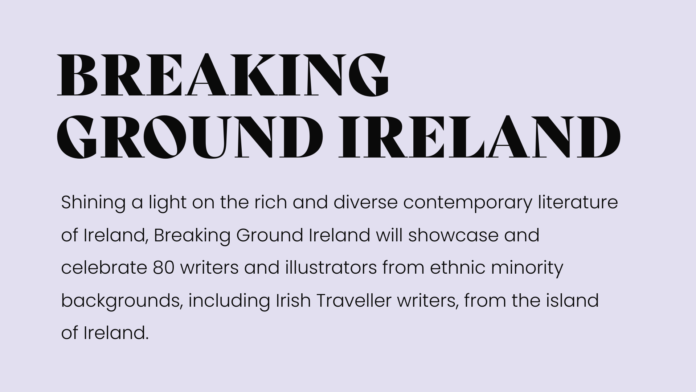 A landmark project has been launched showcasing and celebrating 80 writers and illustrators from ethnic minority backgrounds from across the island of Ireland.

Breaking Ground Ireland, presented by Cúirt International Festival of Literature and NUI Galway, will run alongside Speaking Volumes, the UK-based literature organisation specialising in the promotion of underrepresented voices.

The project is a continuation of the existing Breaking Ground series, which since has supported the careers of hundreds of British writers and illustrators of colour since its creation.

Irish literature is widely recognised and beloved around the world, but recent studies have found that the sector does not reflect the breadth and diversity of writing talent working in Ireland today.

The project aims to provide meaningful opportunities for writers who have not benefited from traditional platforms, and support change growth in Ireland’s literature sector.

A key outcome will be a booklet, in print and digital format, showcasing writers at every stage of their careers from emerging and early-career to established voices.

The booklet will raise the profile of 80 contemporary Irish authors from under-represented, culturally diverse backgrounds, including Irish Travellers. It will be a valuable resource nationally and internationally, demonstrating the range of contemporary Irish literature, and will be distributed to organisations around Ireland including publishers, editors, festivals, arts organisations and local authorities.

It will launch at Cúirt International Festival of Literature, taking place 6-10 April 2022.

The founders of Speaking Volumes said that since they conceived Breaking Ground in 2013 to champion British writers of colour in the UK and abroad, they have witnessed a sea change in the literature landscape.

“From festivals’ increasingly diverse programmes to media reviews of authors of colour, the sector is starting to reflect what Britain really looks like.

“Our Breaking Ground authors include Booker Prize winner Bernardine Evaristo, new non-fiction voice Johny Pitts, up-and-coming poet Afshan D’souza-Lodhi and children’s author-illustrator Ken Wilson-Max among the hundreds we highlight – all of whom have benefited positively from being part of a project with racial and social equality at its heart.

“We have no doubt that Breaking Ground Ireland will have the same wide impact and are delighted to be part of this new iteration.”

Additional project partners include The Irish Writers Centre, and together with Cúirt, IWC will devise a bespoke development programme for up to six writers from Breaking Ground Ireland.

This programme will be devised in collaboration with each mentee, and may include mentorship with a writer, tailored workshops and opportunities to perform their work over a period of three to six months.

Valerie Bistany of The Irish Writers Centre said that the Centre is honoured to partner with Cúirt, NUI Galway and Speaking Volumes (UK) on this “timely initiative which seeks to break barriers of access to under-represented writers in Ireland with the publication of Breaking Ground Ireland.”

“The IWC will play its part in helping to disseminate the publication across our networks to writers and stakeholders who can engage those writers and welcome them into the literary community,” said Valerie.

“We are also excited by the prospect of creating a bespoke collaborative programme for up to six of those writers at an early part of their career to encourage and give them the confidence to continue writing and to immerse themselves in our community.

“This new initiative follows in the wake of our very successful Young Writers Delegate programme that we offer to festivals, and that Cúirt has championed, hosting our inaugural YWDs in 2019 and every year since.

“Celebrating our 30th anniversary this year, the announcement of this partnership is a fitting end to our celebrations and heralds in an important direction for us in our fourth decade as the leading resource organisation for writers of all types and talents  across the island.”