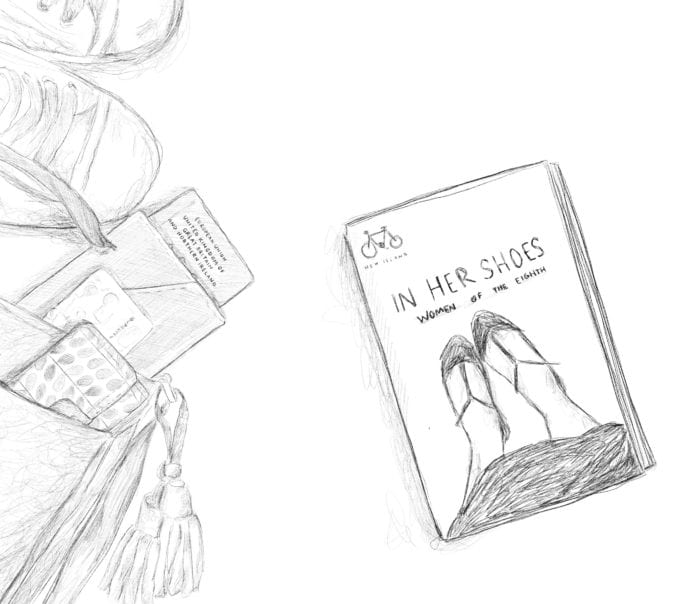 Galway artist Erin Darcy gathers together some of the most impactful stories of women that helped sway public opinion to overturn the 8th amendment in her new book ‘In Her Shoes – Women of the Eight’, and gives a deeply personal account of the impact facebook page of the same name had in that campaign.

In Her Shoes – Women of the Eighth Facebook page began as an art project, where the Loughrea based artist to share anonymous stories of the negative impacts of the 8th amendment alongside a simple photo of a pair of shoes.

In the five months from its creation to the referendum vote on 25 May 2018, the page grew over 115,000 followers with an organic reader reach of over four million per week.

In Her Shoes evolved and became the largest grassroots campaign in Repealing the 8th Amendment. RTÉ reported that it was ‘stories in the media’ that influenced 43 per cent of voters to vote Yes.

These stores are now being collected in a book of the same name, which serves as a memoir and anthology of women’s experiences in Ireland.

Creator and curator, Erin Darcy, tells her story of how ‘In Her Shoes’ came to be, touching on themes of birth and pregnancy loss, grief, depression, mother-loss, motherhood and activism.

“In Her Shoes is a testament to the importance of women’s stories. How giving space for the taboo to walk among us can be healing and transform a nation.”

Fully illustrated by the author, this book will speak to the historical importance of women’s storytelling and include a collection of individual stories from 32 anonymous contributors, representing the 32 counties on the island of Ireland.

By preserving their stories within this book, Erin aims to enshrine women’s experiences in history they are often written out of.

In Her Shoes is the story of a changing social landscape, of an uprising within the author and within Ireland.

Through her work, activism and wide interests – home birth, breastfeeding advocacy, improving maternity services, birth work, autonomy in pregnancy and childbirth – she supports women in their times of greatest need.

Originally from Oklahoma, Erin has been calling Ireland her home 2006 and currently resides in Loughrea, with her husband and 3 children.

“The stories shared within the Facebook page are some of the most harrowing testimonies I have ever had the privilege of holding space for.”

“Giving a selection of them a forever home in a book allows for these sacrifices of our human rights and dignity to not be forgotten.”

In Her Shoes – Women of the Eight is being released by New Island Books this September 2020.

A donation of €1 from all direct sales on newisland.ie will be donated to Women’s Aid Ireland.