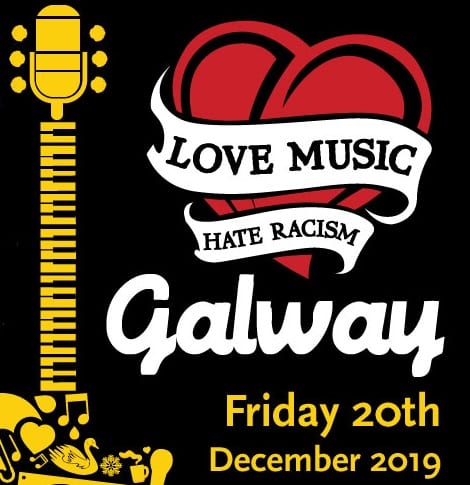 Galway Anti Racism Network are holding a concert this weekend to “end the year on a positive note” after a year of growing divisions.

The ‘Love Music Hate Racism’ gig will take place at Galway Rowing Club in Woodquay from 6pm until late this Friday, December 20.

GARN has organised this gig in partnership with Love Music Hate Racism (LMHR) – a broad based music-oriented anti-racism campaign that “uses the energy and vibrancy of the music scene to promote unity and celebrate diversity through education and events.”

Born out of the Rock Against Racism movement in the late 1970s in response to a rise in racism and far right activity in the UK in the early 2000’s, hundreds of successful LMHR gigs have been hosted across the UK and Europe.

A spokesperson for GARN said that not a week goes by but they get reports of incidents of hate against asylum seekers, members of the Travelling community, migrant workers, or Irish people of colour.

“GARN sees it as our duty to not only address these issues through campaigns and direct action, but also to create an environment where diversity and difference are celebrated, and where ideas are exchanged on how to work together to combat the racism we see and hear on this island.”