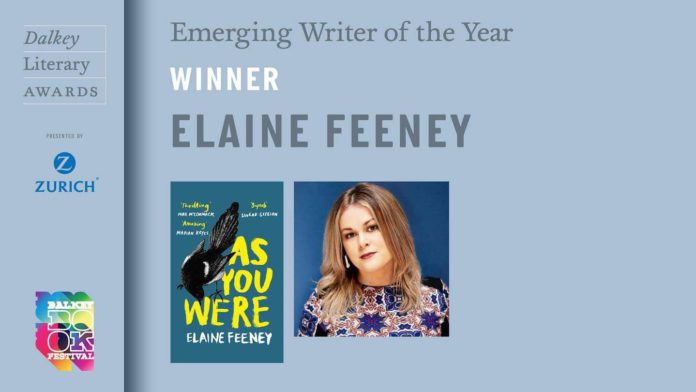 Galway writer Elaine Feeney has been honoured as one of the big winners at this year’s Dalkey Literary Awards for her debut novel As You Were.

Feeney won the best Emerging Writer Award at the 2021 awards at the Dalkey Literary Festival, not only getting the acclaim, but a €10,000 prize.

As You Were tells the story of tough, driven, funny young property developer Sineád Hynes, who is hiding a terrible secret.

No-one knows her secret, not her fellow patients in a failing hospital, and certainly not her family. She has confided only in Google and a shiny magpie.

Across the ward, Margaret Rose is running her chaotic family from her rose-gold Nokia.

In the neighbouring bed, Jane, rarely but piercingly lucid, is searching for a decent bra and for someone to listen. Sinéad needs them both.

As You Were is about intimate histories, institutional failures, the kindness of strangers, and the darkly present past of modern Ireland.

The judges panel described As You Were as a “turbulent firestorm of a book, with a pulsing, rhythmic narrative voice”.

Feeney, who teaches at NUI Galway and St Jarlath’s College in Tuam, has already published three collections of poetry, Where’s Katie?, The Radio was Gospel, Rise, and a drama piece, WRoNGHEADED.

As for this recognition granted to her fiction debut with the Best Emerging Writer award, she said that it is a huge honour, and that she was thrilled to br part of such an amazing shortlist of writers.

“Though no one forces anyone to write a book, it’s often a long journey, my journey was filled with self-doubt, and at times obsession – so it’s reassuring to have my work recognised by the judges.

“An award like Dalkey can really help an artist buy some time to be creative, to take time to work on your art, (and not feel guilty about it) so I’m very grateful.”

Feeney was one of six writers shortlisted for best Emerging Writer at the awards.

The overall winner of Novel of the Year went to Maggie O’Farrell for her book Hamnet.