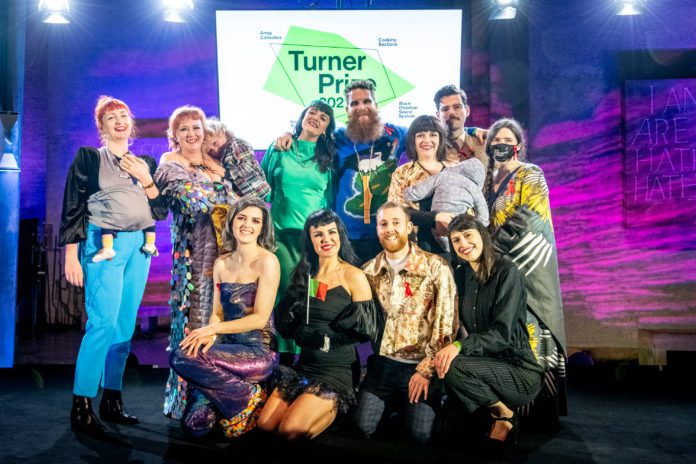 Galway Arts Centre has announced that it will present the 2021 Turner Prize winning work throughout August and September.

The works, installations and performances are by Belfast’s Array Collective, a group of Belfast-based artists from the north and south of Ireland, England and Italy.

The 11 artists live and work in Belfast creating collaborative projects in response to issues affecting the North, such as access to abortion, gay rights, mental health, gentrification and social welfare.

The Array Collective are the first artists from Northern Ireland to win the prize and their work encompasses performances, protests, exhibitions and events.

Part of the major installation is The Druthaib’s Ball, centred on an imagined síbín with a floating roof made from banners created for protests and demonstrations.

The Druthaib’s Ball invites audiences into an immersive experience reflecting the lively community hub of the Irish síbín, a long-established tradition of an illegal bar.

Audiences will gather in the síbín, populated by semi-mythological drúthaib, along with the Ball’s esteemed guests.

To accompany the installation there will be a programme of events with local social justice groups, artists and musicians to animate the sibín with traditional music sessions, dance, storytelling and song.

The Array Collective said that they are delighted to be able to show the work in Galway and open up a fresh dialogue with audiences in Ireland following on from the conversations it generated in England.

“The Galway outing naturally lends itself to explorations of the myths, music and politics inherent in the work.”

“We’re excited to invite audiences from near and far to Galway this August/September to be the first to see this work in Ireland.”

A wider exhibition of artworks by the Array Collective will be on view in the Galway Arts Centre’s gallery spaces providing a unique opportunity for audiences in Galway and beyond to experience vibrant work of the collective.