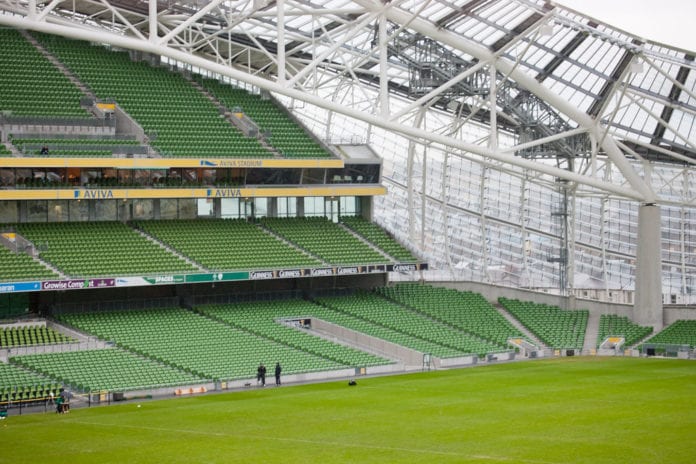 The Republic of Ireland take on Wales in the Aviva in two days time in the third Nations League match since football resumed. Kick-off is at 2.00pm in the Aviva – but Ireland’s home advantage means very little as the ground will be closed to supporters.

Before that, Stephen Kenny’s men must first play an arguably more important game, as the boys in green travel to Bratislava to take on Slovakia in Euro qualifiers semi-final playoff tie.

If Ireland leave Slovakia with a win, they’ll progress to the final of their bracket, a real one legged playoff game to qualify for Euro 2020 (next summer) – which could be against Northern Ireland in Belfast should they beat Bosnia.

Meanwhile, Wales are making a shorter journey to take on England in a friendly, having already qualified for the Euros.

Leaving the Euros aside, the Republic of Ireland will go into Sunday’s clash with Wales after a rocky first couple of games in the competition, coming away with just one point from the opening two fixtures.

Ireland travelled to Sofia at the start of September to face Bulgaria and came away with a point after a 1-1 draw. Kraev took the lead for the Bulgarians in the 57th minute after some questionable Irish defending, but Shane Duffy came to the rescue late on to salvage a point in Stephen Kenny’s first game in charge. The second match was one to forget, a 1-0 home defeat at the hands of Finland.

Wales, on the other hand, will travel to Dublin in good form, sitting comfortably at the top of the table with maximum points from their first two games. Both were 1-0 victories – the first away to Finland where Kieffer Moore kept up his fine introduction to the international scene with a late winner as Wales beat Finland 1-0 in their Nations League opener in Helsinki.

In Cardiff a few days later, the Welsh left it late again – very late in fact – as Neco Williams’ first international goal in the 94th minute sealed a 1-0 win against Bulgaria, with Wales maintaining their perfect start to the competition.

Gareth Bale has been left out of the 27-man Wales squad for the upcoming international fixtures due to injury, but Aaron Ramsey is fit and will return to the team for Sunday.

Bale suffered a knee injury on Wales duty last month and is yet to feature for Spurs after re-joining his former club on loan from Real Madrid.

“We’ve had conversations with both Gareth and the medical team and he’s not quite right for this camp,” Wales manager Ryan Giggs told Sky Sports News.

“It’s nothing serious but it’s just one to keep an eye on. It has just taken a bit of time to settle down and he’s not quite right.”

The Republic of Ireland squad looks good going into the Wales game, provided there are no injuries in the game against Slovakia midweek.

Byrne has been in fine form for Shamrock Rovers who currently sit at the top of the League of Ireland. He turned heads while in action for Rovers in their 2-0 defeat to AC Milan in the Europa League qualifier a few weeks ago, earning him a well deserved call up.

Ireland’s only goalscorer of the campaign goes into the game in fine form, after taking to Scottish football like a fish to water.

The Derryman joined for the 9-in-a-row Scottish champions Celtic on loan from Brighton last month, and has already scored two goals in just five games, scoring on his debut as Celtic strolled past Ross County 5-0 on 12 September.

The six-foot-four defender, who made his Ireland debut six years ago, has scored four goals in 35 caps for his country, and will no doubt be hoping to get his head on the end of a corner against Wales. Therefore it comes as no surprise that Ireland vs Wales 888 football betting odds are reviewed with much anticipation by fans and sports enthusiasts.