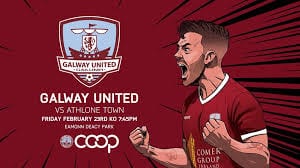 For a team relegated last season, there has rarely been as much excitement regarding a promotion push as there is for Galway United’s upcoming SSE Airtricity League campaign as they prepare to welcome Athlone Town.

We get our 2018 @SSEAirtricityLg First Division season underway on Friday evening against Athlone Town.

A big year awaits, let's get a big crowd up to Eamonn Deacy Park and start the season as we mean to go on! #GUFC pic.twitter.com/4mpkKruzVl

Shane Keegan has assembled a 23-man squad including astute signings and returning heroes.  They include Danny Furlong (who scored 30 goals when Wexford Youths won the 2015 First Division), former captains Alan Murphy and Ryan Connolly, and Conor Gleeson from their 2014 promotion.

While only nine remained from the 2017 squad, Keegan has done well bringing together a decent unit but how good his new look team is will start being answered tonight.

It’s often a curse to begin a league as overwhelming favourites but Galway United are expected to bang in the goals.  The hosts are 1/9 to beat Athlone Town who are priced by some very generous bookmakers at 28/1.

The midlands outfit have propped up the First Division for the last two seasons getting just four wins from 28 games in 2017.  And match fixing allegations including two long-term suspended players has left the game in Athlone in turmoil and a lot of rebuilding to do.

Aaron Callaghan is the new manager, replacing Roddy Collins who’s moved upstairs to General Manager.  O’Callaghan has previous experience with UCD’s relegation campaign in 2014 and they will be up against it.

While Galway United can’t afford any complacency, the difference between the teams is shown from their transfer dealings.  Gleeson, Stephen Walsh and Conor Layng were with Athlone last year but now wear maroon.  Igor Labuts, Jason Lyons and Dragos Sfrijan also miss the game through suspension.

Conor Melody is United’s only absentee as the make-up of Keegan’s team will be interesting.  Tadhg Ryan is expected to start in goal while Walsh, Gary Shanahan, Robbie Williams and Aaron Conway will be fancied for the defensive slots.

Murphy, Kenny, Connolly and Conor Barry can expect Harrison Reeves to challenge for a midfield berth if eligible.  And will Conor Layng or Eoin McCormack have to make way for Furlong upfront?

The team’s last meeting was in the 2008 FAI Cup when Galway United prevailed 4-1.  Their last league meeting was 5-0 in favour of the Tribesmen.  The same will be expected tonight.