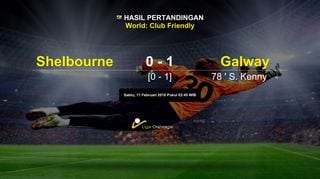 Galway United completed their pre-season preparations in Tolka Park on Friday night as they emerged victorious away to First Division Rivals Shelbourne.

Stephen Kenny’s free kick 13 minutes from time proved the difference in a contest where both teams had multiple chances and both managers got to look at their bench options.

While the Premier Division commenced this weekend, the First Division teams don’t see competitive action until next Friday and Galway United will look forward to welcoming Athlone Town to Eamonn Deacy Park.

But they were put through their paces in this game with Adam Evan creating early chances for David O’Sullivan before the latter was denied by the post in Shelbourne’s best chance on 25 minutes.

Stephen Walsh, Ryan Connolly and Kenny also came close before the break with the latter forcing a stop from Dean Delany.

An injury to Shelbourne’s Aidan Collins held play up in the second half and 11 minutes of added time occurred before the conclusion.

The winning goal on 77 minutes came when Kenny’s free kick missed the defensive group and skidded off the ground past substitute Lee Steacy for the defining score setting the Tribesmen up for the new season on a high.

Ger Deegan wrote in extratime.ie – “A sole Stephen Kenny goal gave the Tribesmen the victory in a fiercely competitive game.”