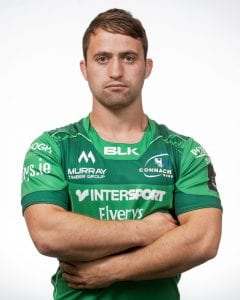 Scrum-half Caolin Blade is set to captain Connacht for the first time as his side take on Sale in the European Challenge Cup on Saturday (20th October).

With Jack Carty rested after playing seven games in a row, Blade will form a half back partnership with Academy player Conor Fitzgerald who made his debut off the bench in the win over Bordeaux-Begles last weekend.

Connemara man Colm De Buitléar is named on the wing in what will also be his first competitive start for his province.

The back line is also boosted by the return of centre Tom Farrell who forms a midfield partnership with Kyle Godwin. The versatile Godwin scored two tries in a Man of the Match performance on the wing in the opening round.

Tiernan O’Halloran also returns from injury to take his place at full back. He is part of a back three that includes 20-year-old De Buitlear and Niyi Adeolokun on the opposite wing.

In the forwards, the experienced Denis Buckley returns at loosehead alongside hooker Shane Delahunt and Conor Carey at tighthead. Behind them will be Irish international Ultan Dillaneand James Cannon.

In the back row, Paul Boyle moves to blindside while openside Colby Fainga’a and Robin Copeland at number 8 are both retained.

Two more players are in line to make their Connacht debuts off the bench. Academy prop Matthew Burke is included in the matchday 23 while summer arrival David Horwitz is also in the squad for the first time, after the out-half made an appearance for the Connacht Eagles last weekend.

The bench also includes scrum-half former Sale player James Mitchell, who could make an appearance against his former club.

“Sale are an impressive side and they are top of the pool after the bonus point win away to Perpignan last weekend,” said Connacht Head Coach Andy Friend to Connacht Rugby’s official website.  “We have picked a strong side.

“We have a few new players coming in who are there on merit and then we have a few more experienced guys coming back from injury. We have picked a side that we think can win the game and that is our intention going over to Sale.

“With ourselves and Sale both winning in the opening round, this game will have a big say in the final standings.

Connacht meet Sale Sharks in their second fixture of the 2018-19 European Challenge Cup on Saturday, 20th October.  Kick-off at the AJ Bell Stadium is 3pm.