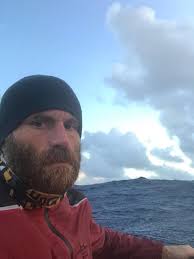 Browne began his journey on his boat Gulliver’s Travels in from the Canary Islands nine weeks previously and negotiated high winds and capsizing as well as a near brush with a cargo ship before reaching his destination.

The 37-year-old took to endurance events after completing a rugby career that also saw him line out for Leinster, Northampton, Brive and Oyonnax and entered the Marathon des Sables in April 2016 before embarking on this challenge.

More people have surfaced Mount Everest or travelled to space but the novice rower trained up and down the west coast of Ireland before embarking on his 4,800 kilometre journey in December.

Browne did the challenge for many causes like Medecins Sans Frontieres, the Strong Roots Foundation in Rwanda and Madra Dog Rescue and Adoption.  And he followed in the footsteps of fellow Galway man Gavan Hennigan who completed the feat in 49 days last year.

“It feels so good to finally arrive to such an amazing welcome in Antigua after nine weeks of suffering and hardship,” said Browne upon his arrival.  “Without a doubt this is the toughest challenge I have ever taken on – but one I’ll never forget.”

“It’ll take a long time to process what I’ve just achieved, it was a huge challenge and journey that will live with me forever.”

Browne described his close shave with the cargo ships as “possibly the scariest moment of the crazy journey so far” but he completed his voyage safely and was greeted by his parents Mary and Joe, sister Gillian and brother Andrew (who currently plays for Connacht).